Grenadian food reflects the cultural diversity of the island and so its dishes are heavily influenced by the different cultures that have inhabited the island including the indigenous Caribs, French and British colonists, West Africans slaves whose descendants now make up a majority of the population and Indians who originally came over as indentured labor. And a perfect introduction to authentic cuisine on the Spice Isle of the Caribbean is via a Grenadian food tour with Savor The Spice.

Known as the original Grenada food tour company, Savor The Spice was launched 2017 on February 7th which is the anniversary date of Grenada’s Independence. Tasha La Touche who is the founder and chief epicurean of Savor The Spice has a passion for sharing Grenada with the world and states “I’m a self-proclaimed foodie and ambassador of my little island in paradise. A lover of Caribbean cuisine, I saw a way to mesh my love for Grenada, with my gift of hosting and event planning. Savor The Spice gives me the venue to bring it all together and share it with the world.” 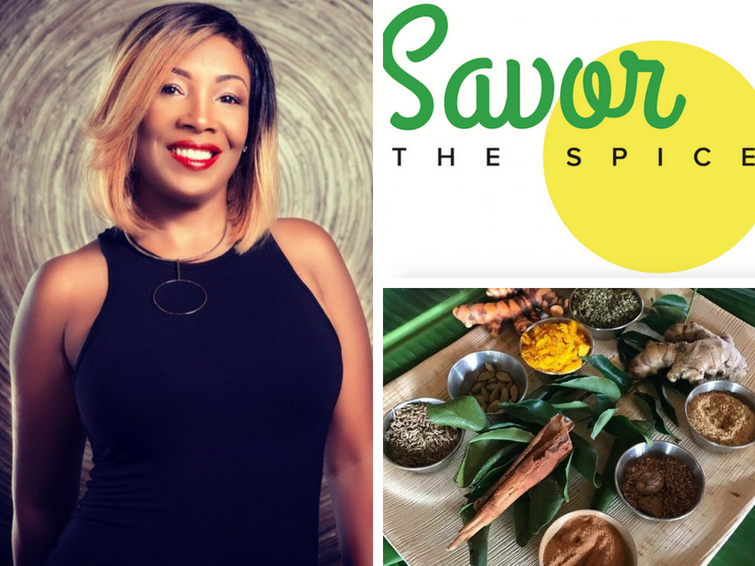 Savor The Spice offers a number of Grenadian food tours and experiences including Savor The Town which I’ve highlighted below and would recommend to foodie cruise passengers on Grenada for a short while as its a 3-hour walking food tour. If you are in Grenada for an extended stay, the Savor The Town tour would also be perfect at the start of your vacation as it will provide proper orientation of favorite sites in the capital city of St George’s, and you can then double back to some of the restaurants, shops, museums, etc. Plus not only will you be sampling a range of delicious Grenadian food, but getting culinary insight along with architectural, historical, and local cultural commentary.

That said, as downtown St George’s is a bit hilly, wear sensible shoes with cool clothing and a hat as the temperatures can get very hot! Also, as the stops are plentiful, would recommend a very light breakfast if at all. Then once on the Savor The Town tour, manage your portions so that you’ll have room to try all the authentic Grenadian food and drinks. And worry not about the calories, this is a 3-hour walking food tour, so you are bound to burn more than you eat. Well, that’s the hope anyway!

At the start of the tour we visited Country Kitchen Restaurant & Bar a former police canteen that is now a favorite lunch spot with locals, we sampled a range of traditional food which includes what Grenadians (really all Caribbean people) call “ground provisions” so yams, sweet potato, and green banana. Other dishes included rice, stew turkey, stew fish, and coleslaw. All the food, except the rice, was grown and harvested in Grenada.   It was all hearty and oh so delicious. 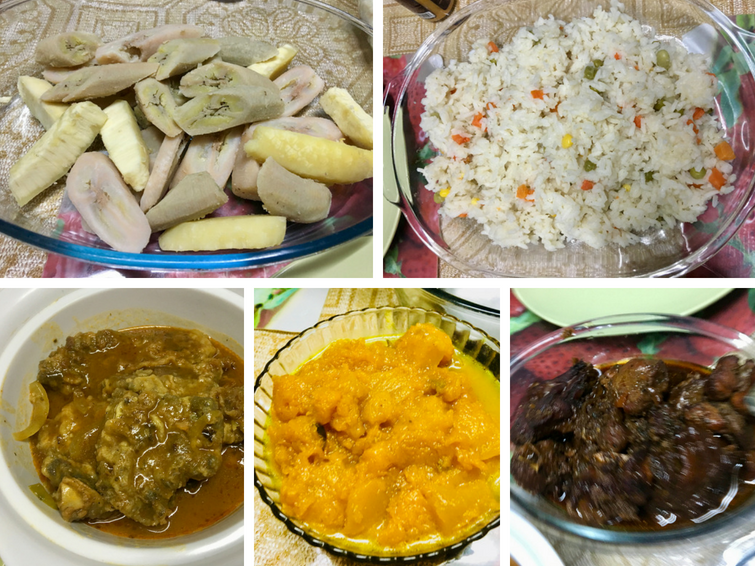 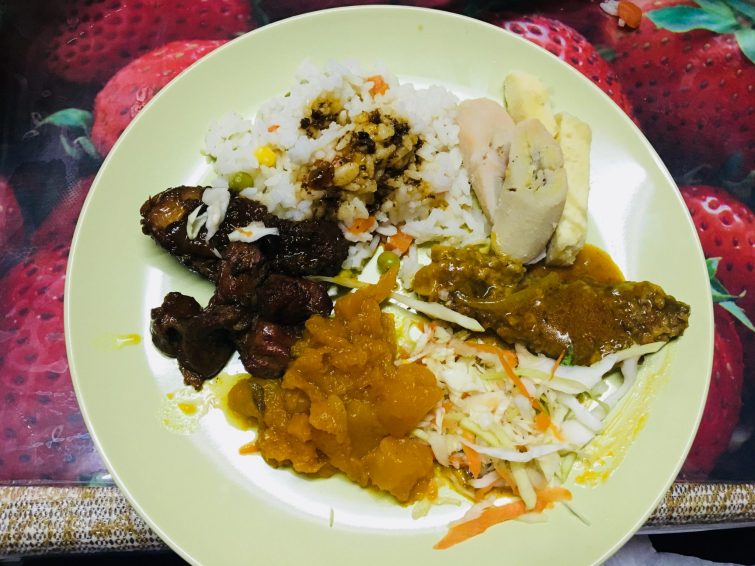 With over 50+ small booth, the Grenada Spice Market is the perfect place to purchase Grenadian spices, jams and an assortment of souvenirs. However, as most of the stalls sell similar items, it can be somewhat overwhelming as to which ones to check out. So it was good to have a scheduled stop with Booth 14 owner, Gemma King who has been a fixture in the market for over 28 years. 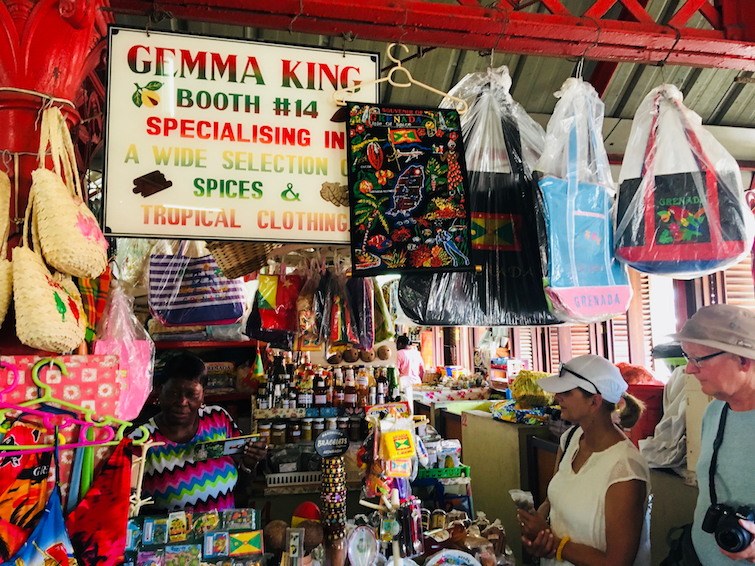 I’m a big fan of coconut water as its refreshing, tasty and also nutritious. And I like to savor the taste by drinking slowly but not too slowly as the best part is eating the soft jelly once the coconut is cracked open.  Beyond the coconut water and soft jelly, a real treat here for me was watching the lady, Ms. Katherine cut the coconut with the machete.  Now, this is a skill I’d like to master because as my 96-year-old grand aunt told me recently when I was in Montserrat struggling to cut a coconut open, you can’t wait for a man to do everything for you, so you must learn how to use a machete to cut your own coconut among other things.  I kid you not! 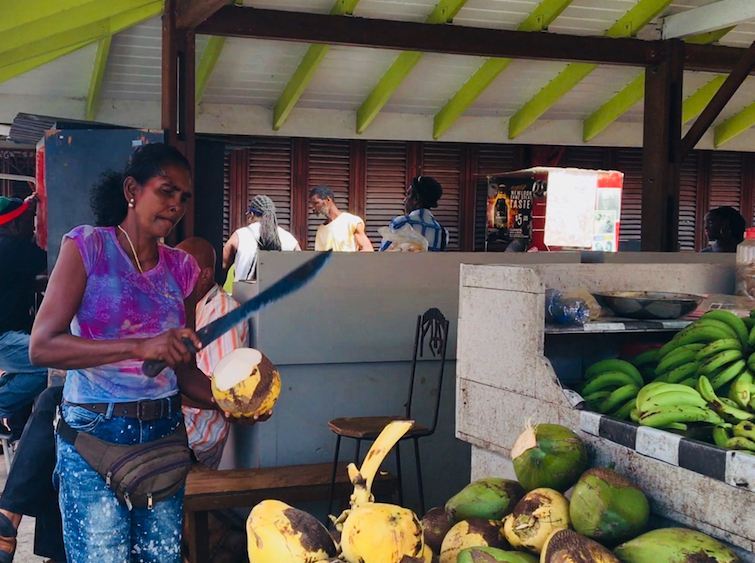 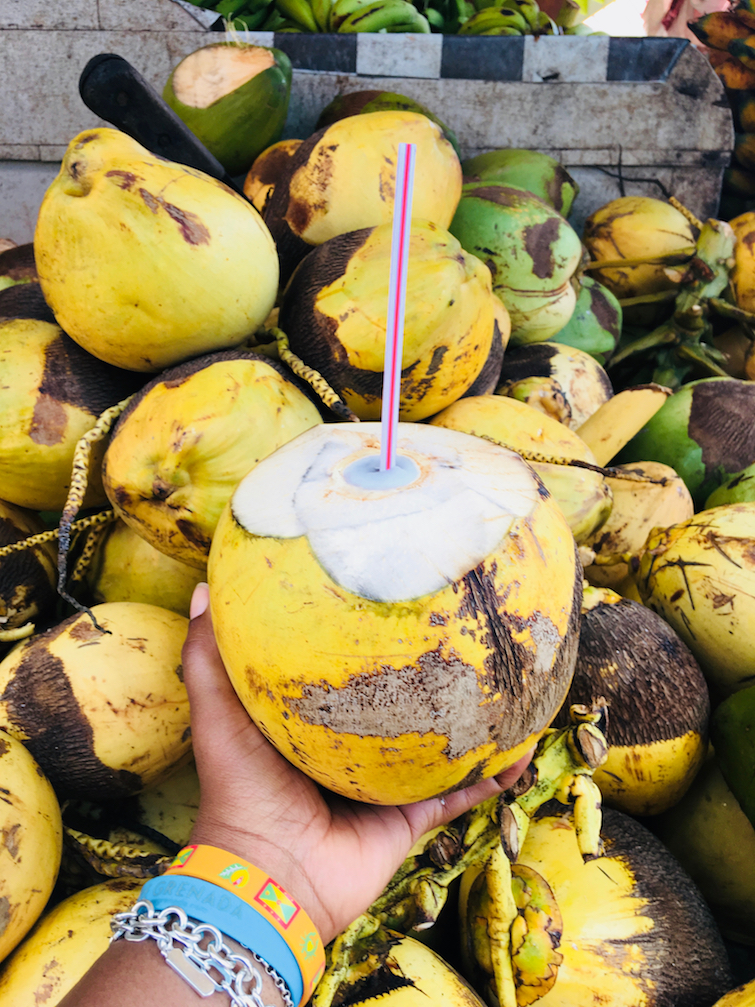 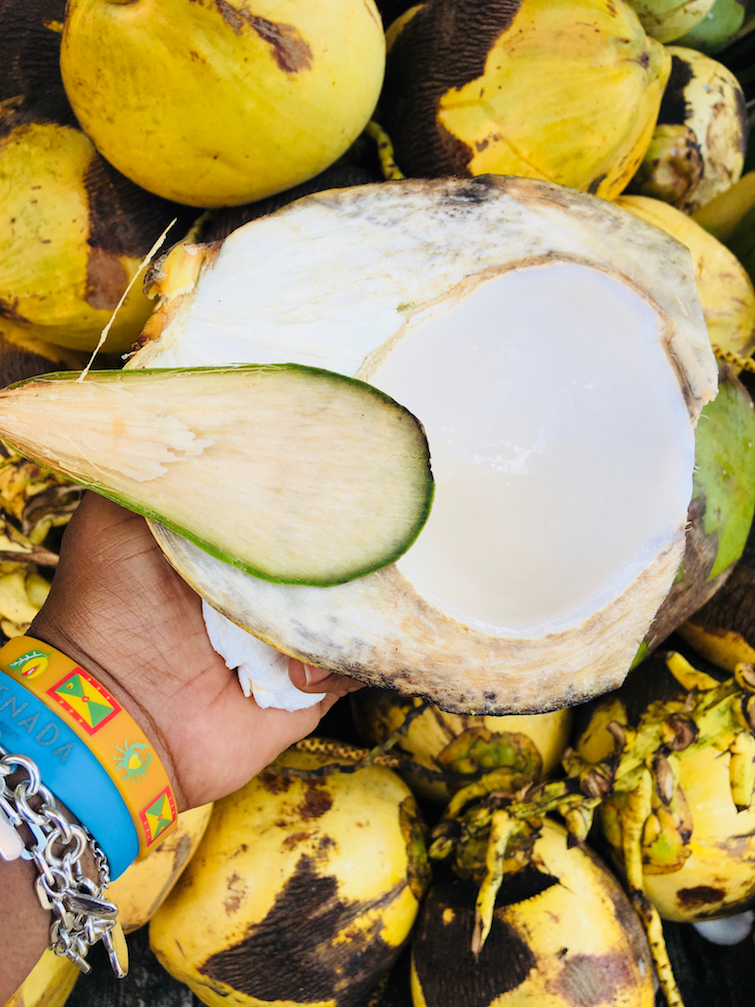 Fruits are plentiful in Grenada, and as it was hot and the sun was beating down, it was refreshing to sample two different smoothies – the first a Julie mango smoothie and the second a soursop smoothie. I normally prefer peeling and eating ripe mangoes but the cold and tasty mango smoothie went down like a real treat.  As for the soursop, this is also a Caribbean fruit I like to eat plain or sprinkled with a bit of sugar.  With its sweet flesh and distinctive flavor, soursop also known as custard apple is thought to have medicinal qualities. 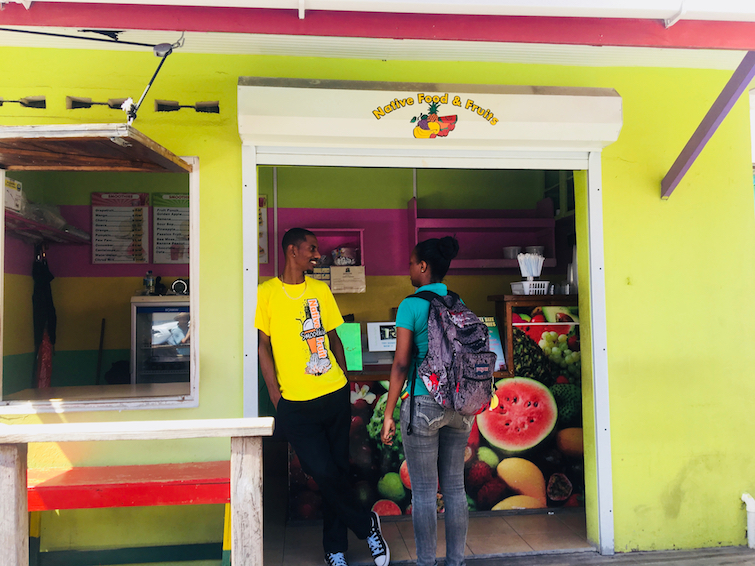 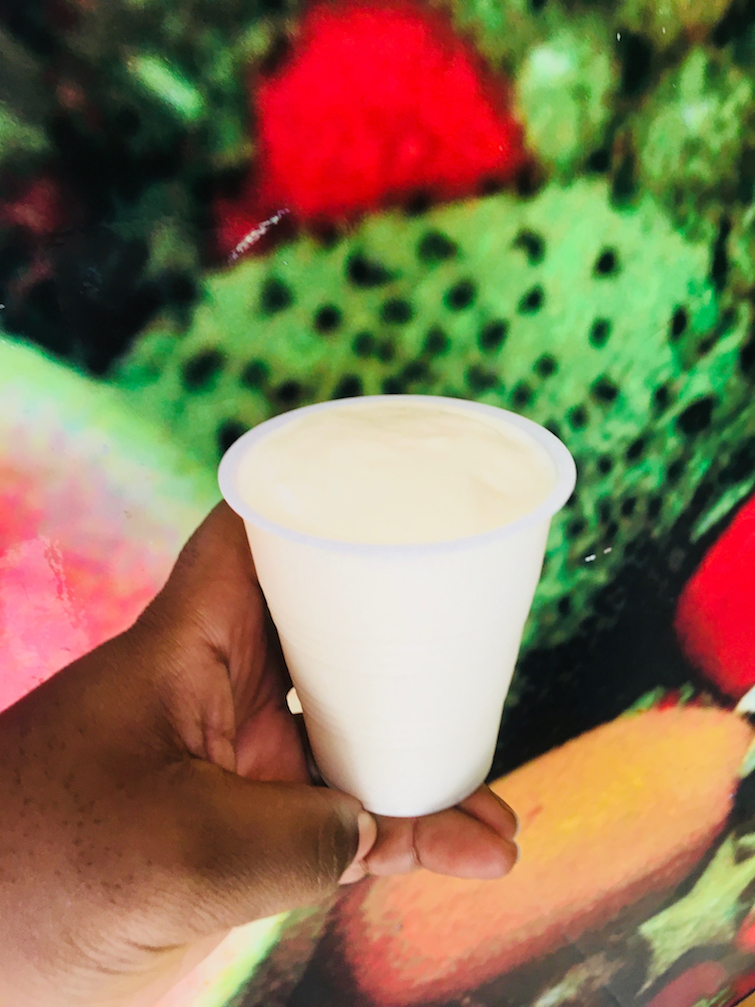 This stop was a bit different from the others as it is an art gallery owned by Polish artist and designer Maria Mclafferty who has lived in Grenada for over 20 years. Here while browsing the art made mostly of glass, we munched on cinnamon rolls with coffee rum; also smoked salmon on baguette pieces. 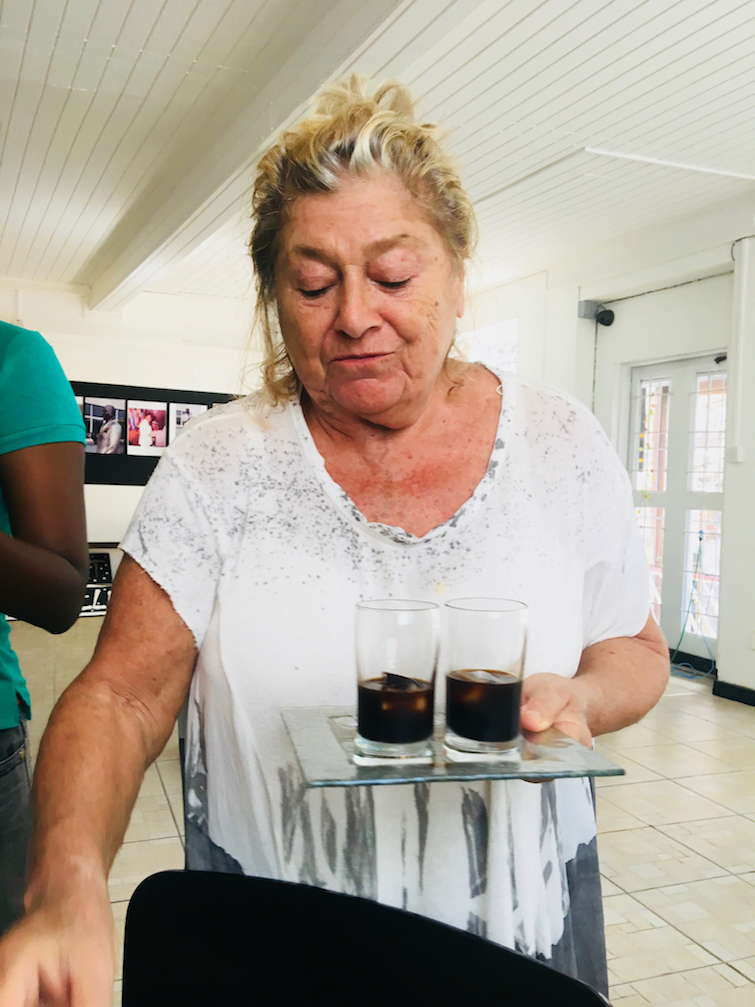 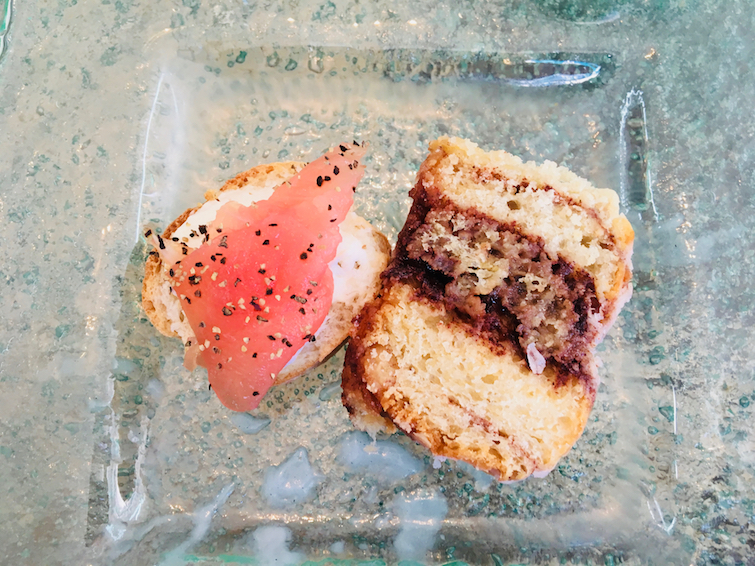 The Nutmeg Bar & Restaurant in Grenada

Located along The Carenage, the view from The Nutmeg Bar & Restaurant is quite picturesque. And here we munched on chicken roti which was accompanied by a local passion fruit drink. Roti is originally from India and was brought to the Caribbean by Indian indentured laborers who came to work the sugar plantations after slavery was abolished in the region. 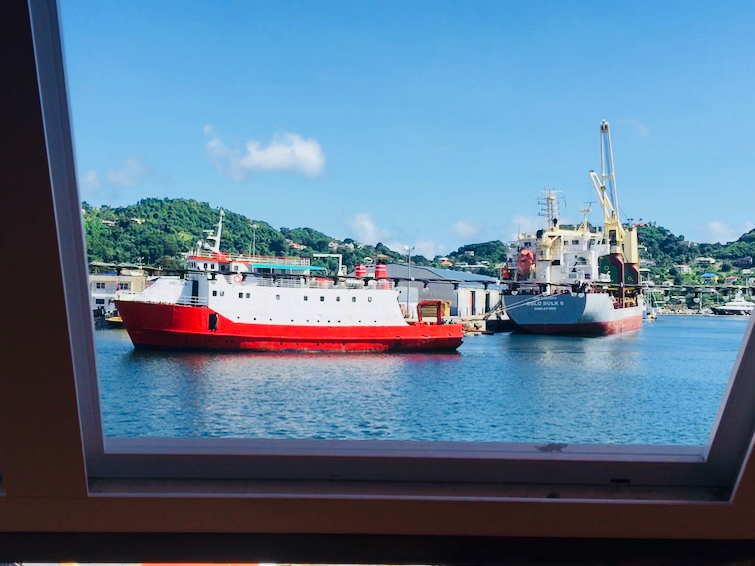 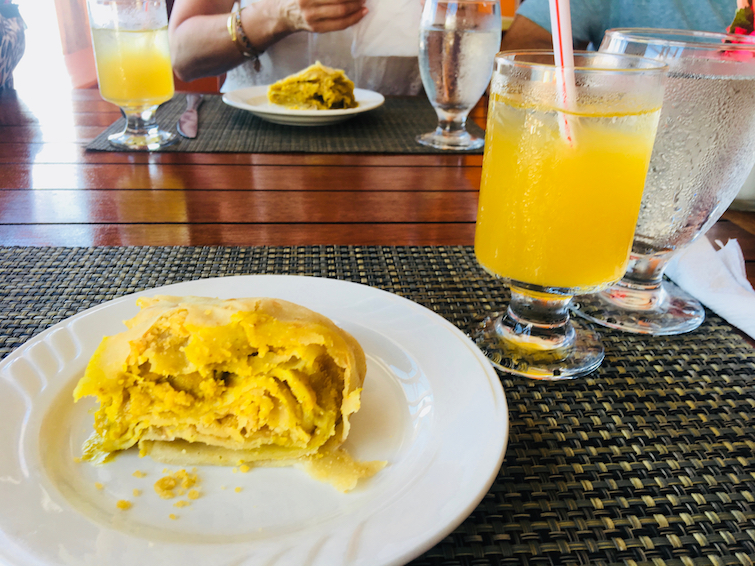 The final stop on the Savor The Town tour with Savor The Spice, was the House of Chocolate, a small museum with cafe and shop featuring Grenada’s fine flavor cocoa & chocolate. Here we munched on chocolate cheesecake with chocolate ice cream but I have to admit I didn’t each much as I was so stuffed.  As such, spent most of the time browsing the museum and shop which has a plethora of cocoa and other food products from Grenada that would make perfect souvenirs. Cocoa was initially introduced to Grenada in the 1700s. The fine flavor cocoa beans were traditionally exported to chocolate producers, but in 1999, the Grenada Chocolate Company was launched and became the first bean-to-bar chocolate company this century.  There are now five bean-to-bar chocolate companies on Grenada. 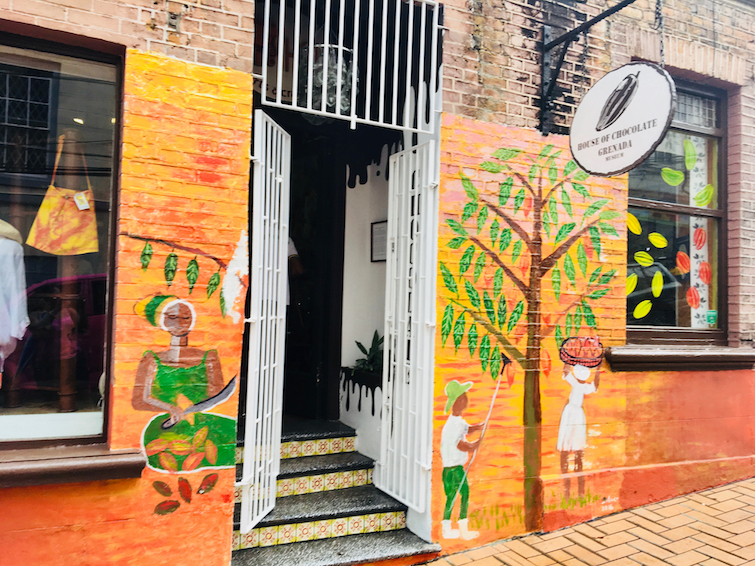 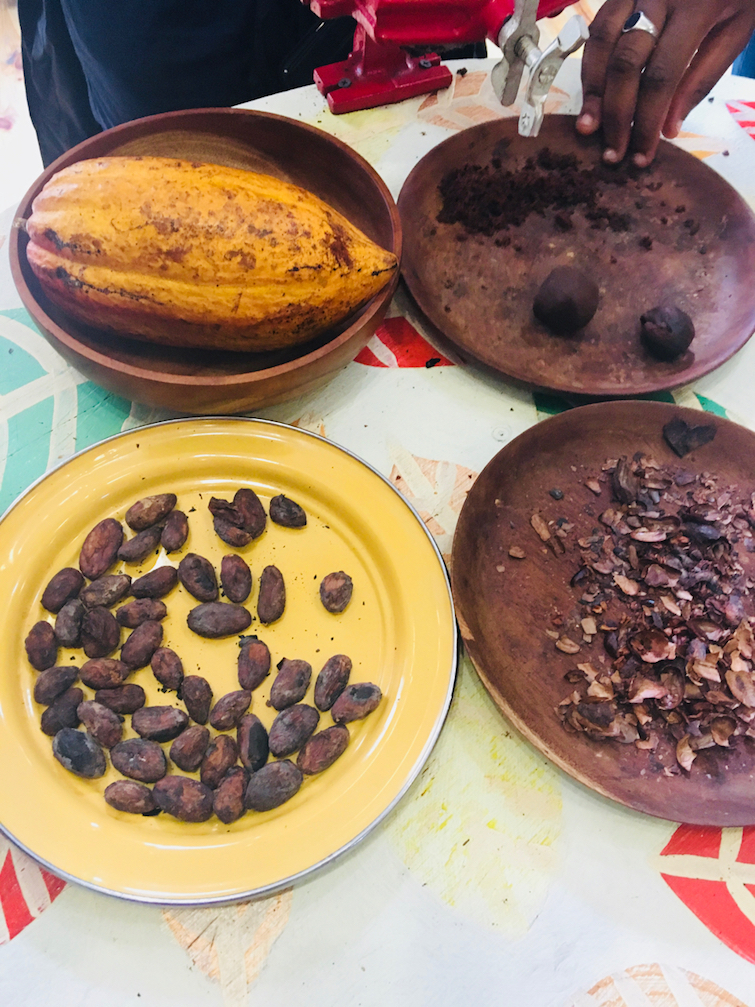 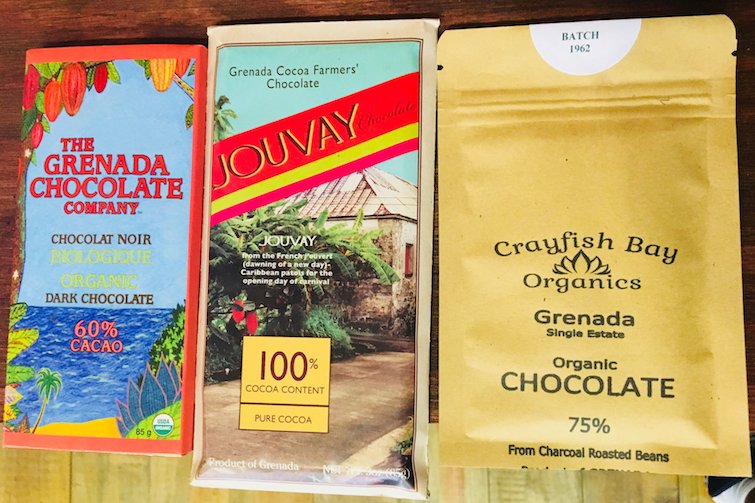 Now I have to admit that I didn’t think we could get through these seven culinary tour stops in 3-hours as most things in Grenada and really the Caribbean, operate on island time, so very slowly. However, the vendors and restaurants all knew we were coming and so were prepared as once we arrived at each location, we were promptly seated and/or served. The tour is also capped to twelve people which helped to make things go smoothly. As for the Grenadian food and drink, it was all exceptional, well except for the coffee rum but that’s mostly because I don’t like coffee. HA!

As such, are you intrigued enough to join the Savor The Town tour with Savor The Spice on your next visit to Grenada?  Hopefully YES! They were recently awarded a Certificate of Excellence from TripAdvisor so others are also raving about this Grenadian food tour.  You get to sample delicious Grenadian food from a broad range of establishments, and you learn a lot about the rich history and culture of the island. So it is a perfect way for foodies to spend an afternoon in St George’s, Grenada. If you have more time, consider the Savor The Country tour which is a 6-hour Grenadian food tour throughout with stops at local farms, gardens and even a waterfall or two. Shortly, you’ll also be able to take a Grenada cooking class at their Savor Culinary Studio which will be on the Carenage in the heart of St George’s located within walking distance from both cruise ship terminals.

Read:  Top 10 Things To Do In Grenada 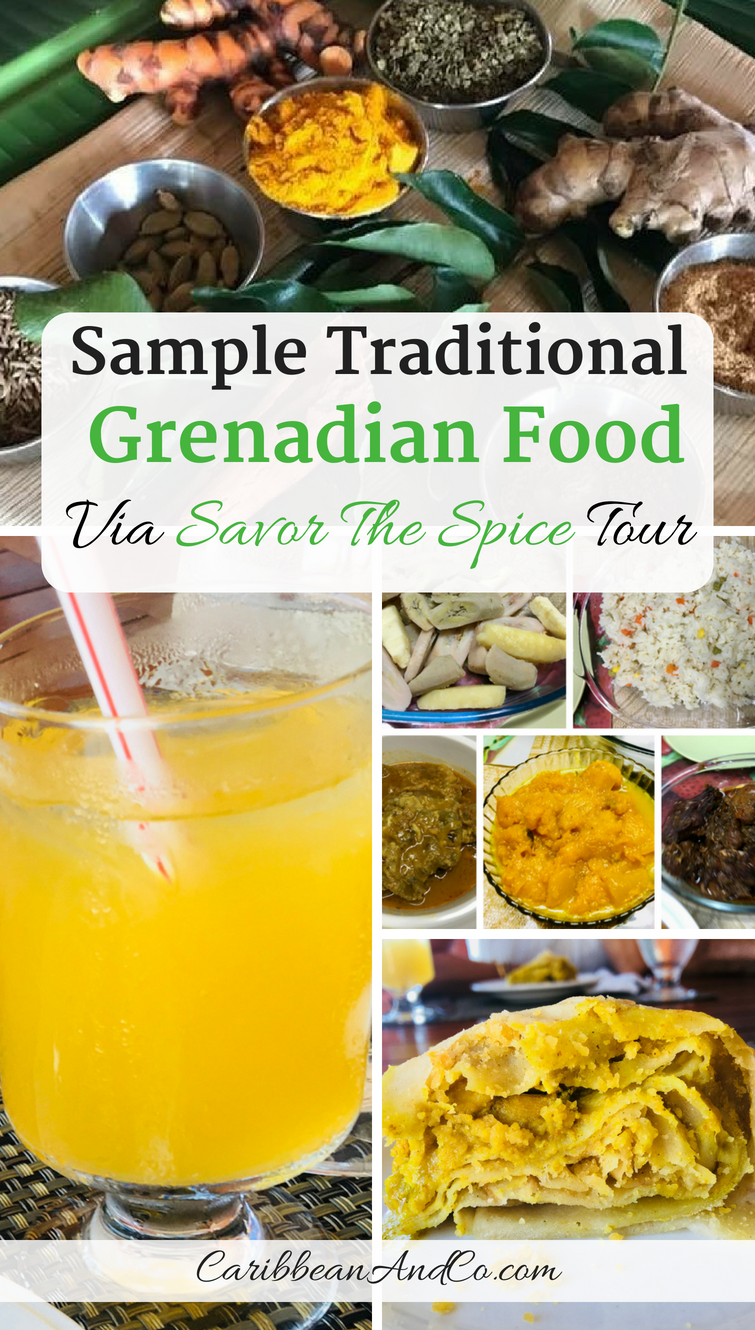 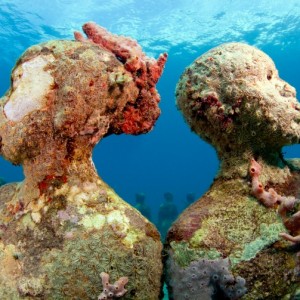 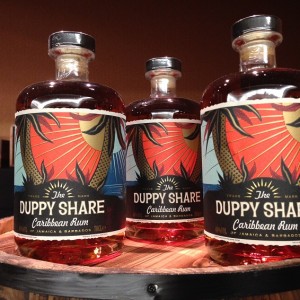 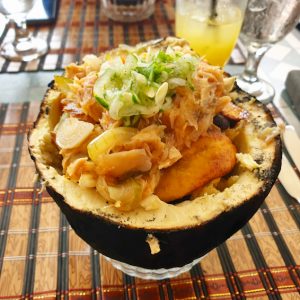