One of Barbados’ newest museums is The Exchange Interactive Centre, also known as the Exchange Museum Barbados. It is housed in a beautifully restored 18th-century building that was previously the home of Harrison’s Free School (1745 to 1871) and a Masonic Lodge (1871 to 2005).

The Exchange Museum Barbados, which began operations in January 2018, is within Historic Bridgetown and its Garrison, now a UNESCO World Heritage Site.  Located on Spry Street, in the Central Bank of Barbados courtyard, the museum is family-friendly, interactive, and ideal for those who want to learn about the history of Barbados as it relates to business, trade, currency, and education.

There are three permanent exhibitions at The Exchange Interactive Centre, also known as the Exchange Museum Barbados. Over two floors, these include:

The Currency Exhibition, which takes up the first floor at the Exchange Museum Barbados, provides insight into the development of business and trade in Bridgetown and its contributions to the world starting in the 1700s. Part of the exhibition features Black business owners like merchant London Bourne and hotelier (and brothel owner) Rachel Pringle Polgreen. There is a life-size caricature of Rachel Pringle Polgreen (see below), and you can pick up an audio phone to learn more about her fascinating life story. She owned the Royal Naval Hotel, which was visited by Prince William Henry (later King William IV of Great Britain) in the late 1780s.

The Currency Exhibition also displays a wealth of information about the history of currency in Barbados, the Caribbean, and across the globe. For example, did you know that the early British settlers in Barbados and much of the Caribbean used cotton, tobacco, and sugar as legal tender? This is because Britain didn’t allow the export of coins, and the colonies were not allowed to mint their own. As a result, in addition to using crops as currency, a wide variety of Spanish, Portuguese, French, and Dutch colonial coins circulated in the West Indies until 1788, when Sir Philip Gibbes introduced the ‘pineapple penny’ to provide coins for small local transactions. 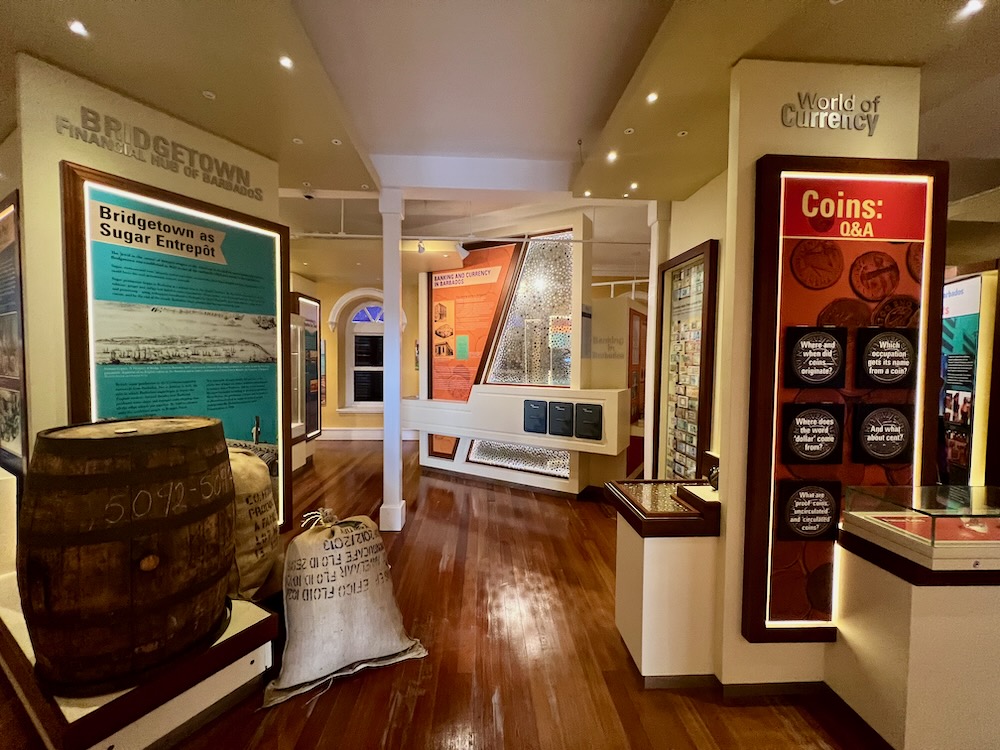 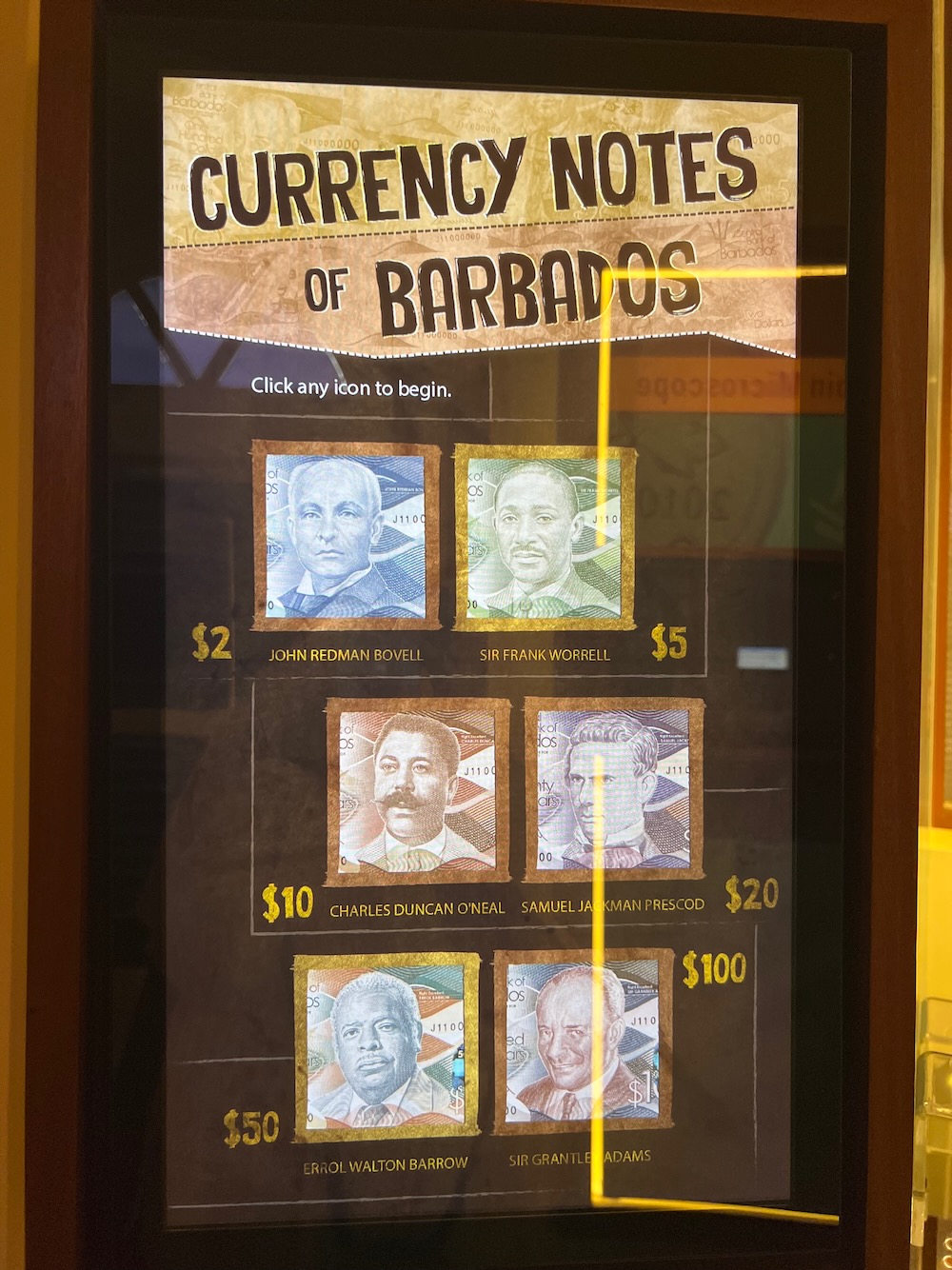 The Freemasonry Exhibition, on the second floor at the Exchange Museum Barbados, pays homage to the building’s past, specifically being a Masonic Lodge from 1871 to 2005.  The exhibition provides insight into the history of freemasonry and how it came to be in Barbados. Membership in the secret society included prominent Barbadian politicians like Sir Grantley Herbert Admas (Barbados’ first Premier and the first and only Prime Minister of the West Indies) and Errol Walton Barrow (Barbados’ first Prime Minister). The freemasonry section also highlights other famous members across the globe, including George Washington, Sir Winston Churchill, Nat King Cole, and Edward Buzz Aldrin. 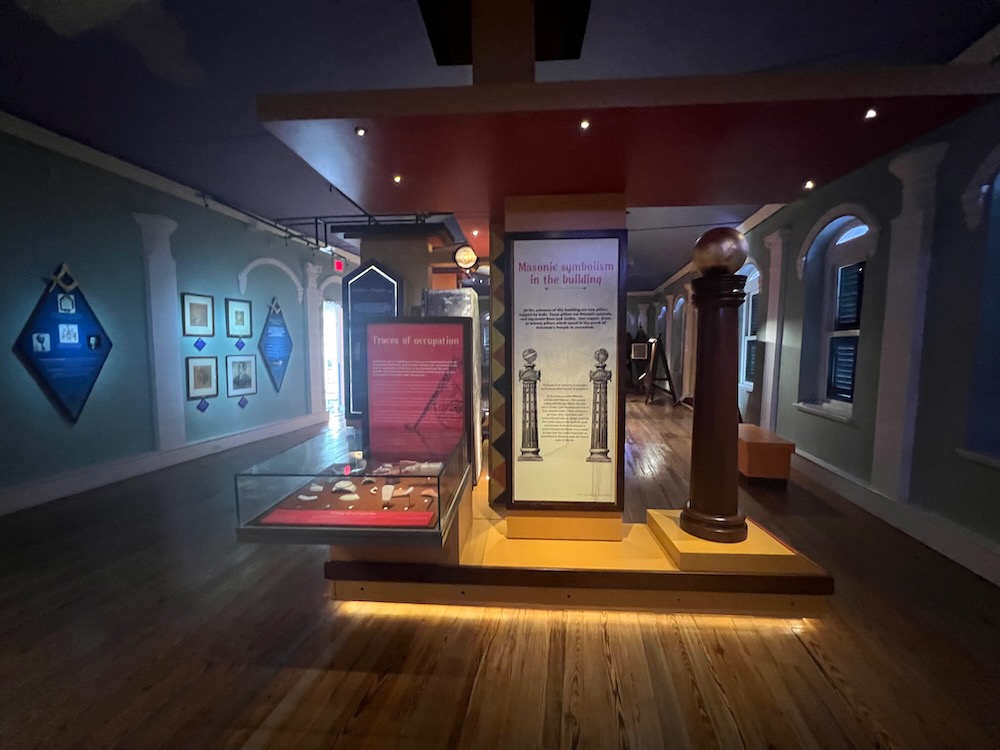 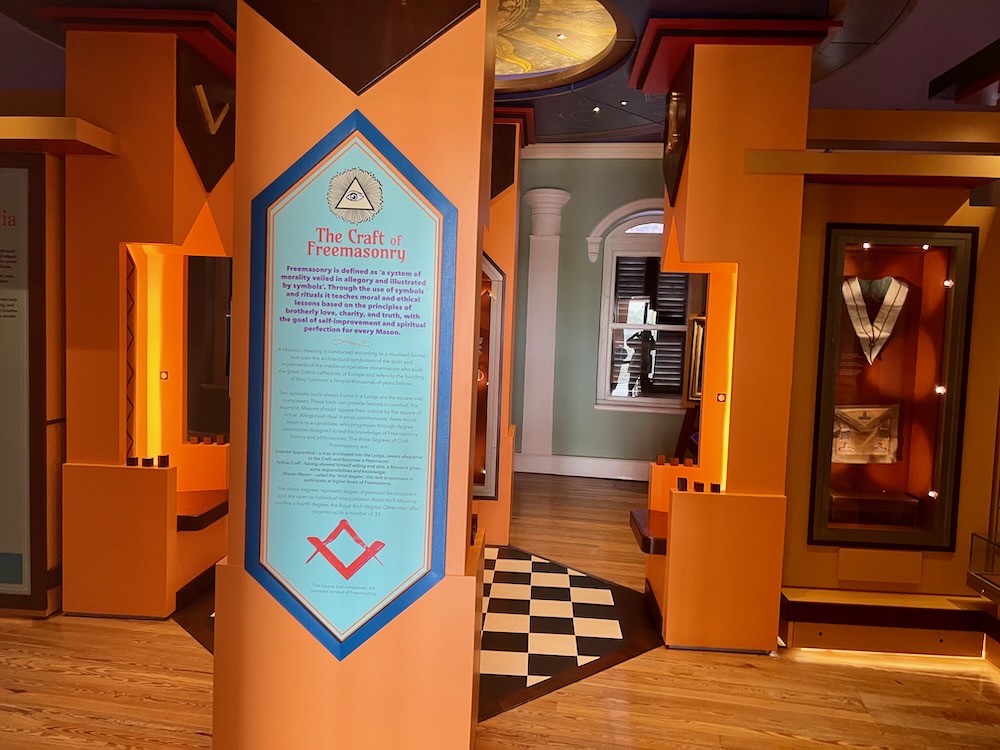 The School Exhibition, on the second floor at the Exchange Museum Barbados, also pays homage to the building’s history, having been the home of Harrison’s Free School, now known as Harrison College.  It was founded in 1733 by wealthy Bridgetown merchant Thomas Harrison and moved into the now museum building in 1745.  No more than 24 pupils attended the school at any time, and they were White islanders who could not afford to send their children back to England for school.

Beyond Harrison’s Free School, some of the other early schools in Barbados are referenced in the exhibition.  This includes the Seminary for Young Ladies, which was opened in 1815 by Eliza Fenwick and her daughter Eliza Ann Rutherford. Also, St. Mary’s Elementary School which was the first school for Black boys.  It opened in 1818 in the Masonic Temple on Mason Hall Street. More schools were also established in 1819 by the Society for the Promotion of Christian Knowledge, but they were restricted to White children. In the 1820s,  a Model School and an Infants School were set up by the Mico Charity, which funded the education of Black children before Emancipation in 1834. 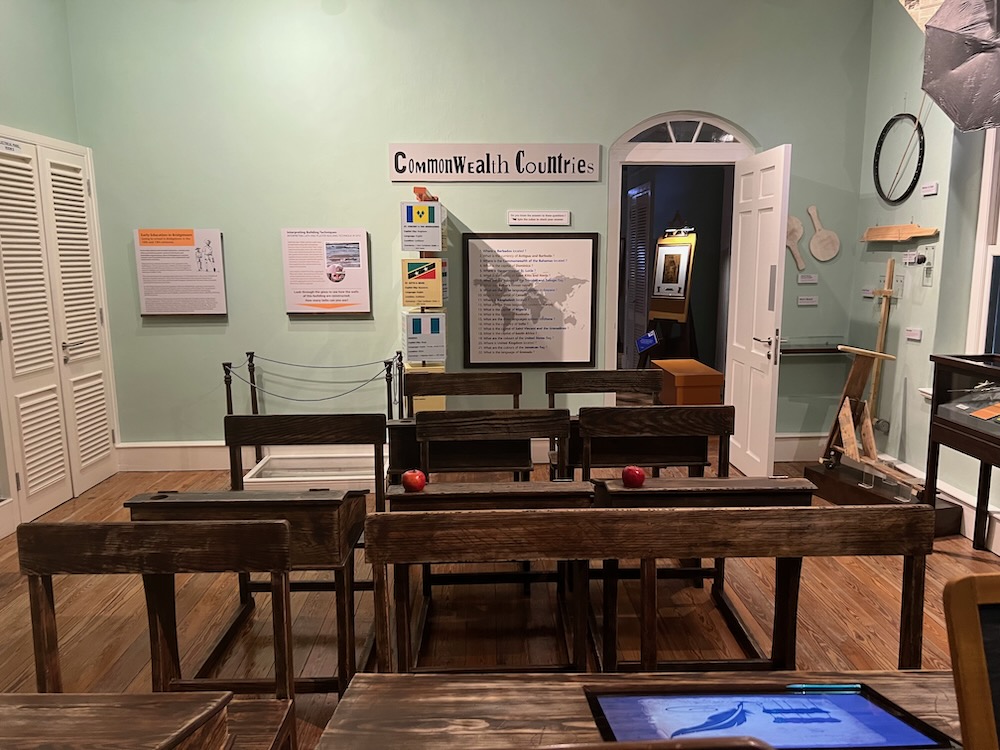 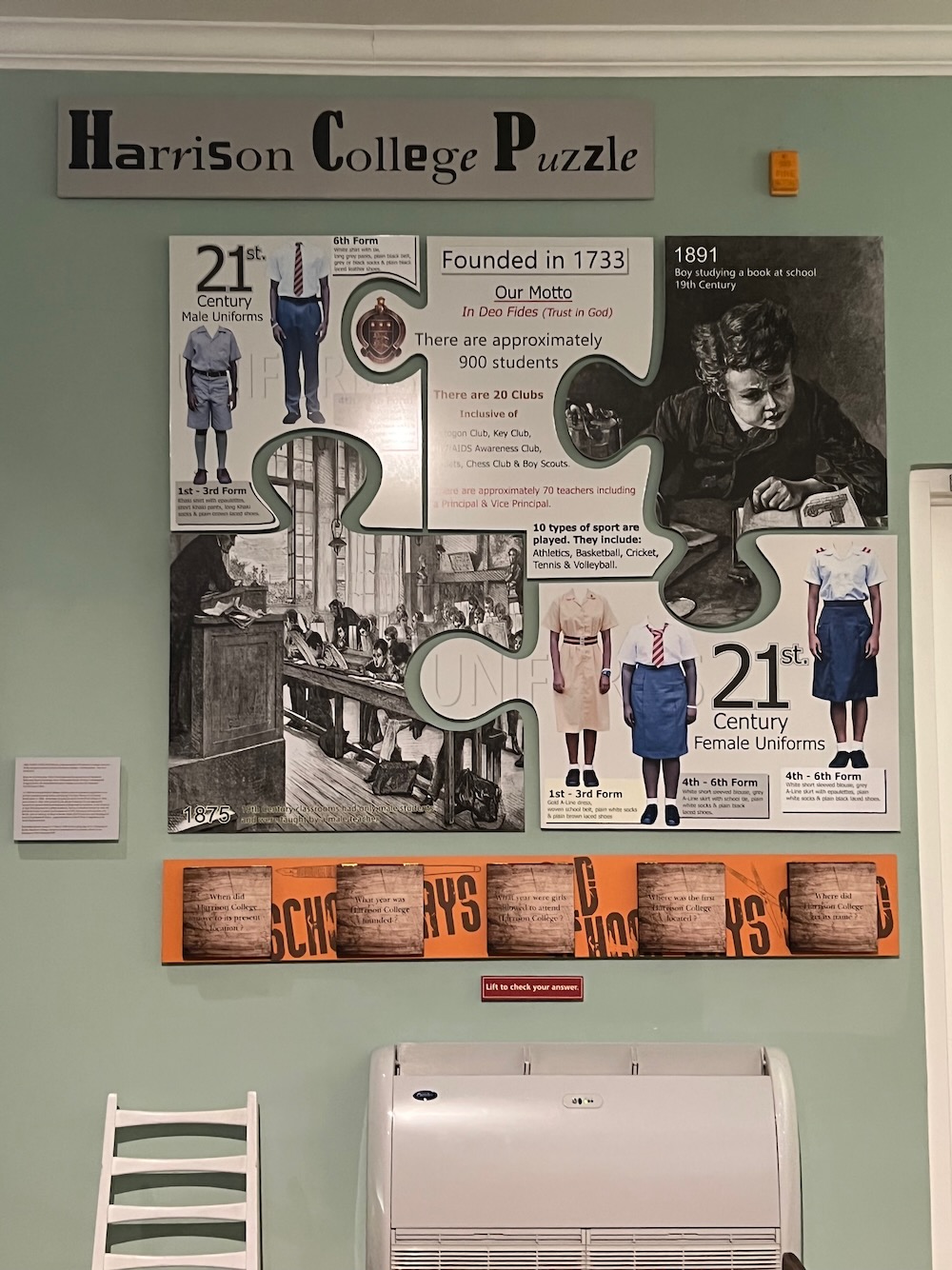 One of my favorite interactive pieces from the Exchange Museum Barbados is a timeline highlighting over thirty major trade events in Barbados during 300 years. As you turn each ball on the timeline, you learn about Barbadian history and get insight into how it became the crown jewel in the British colonial empire. 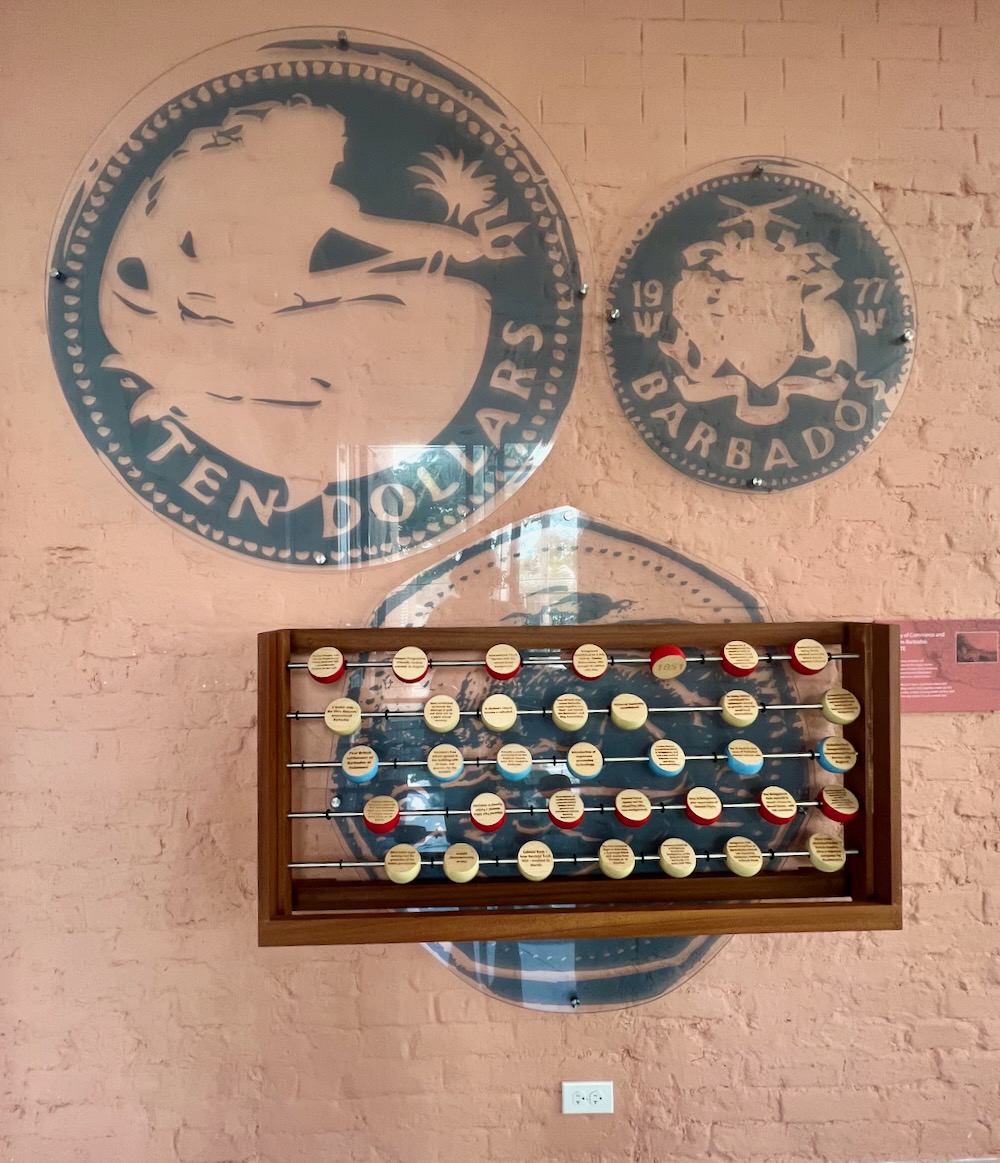 1628: On July 5, Bridgetown was established by Charles Wolverstone, who Brough 64 settlers with him.

1706: Bank was established to remedy the shortage of gold and silver coins with a paper money currency.

1745: Harrison’s Free School (now Harrison College) opened in this building (where the Barbados Exchange Interactive Centre is located) with 24 boys and quarters for the masters.

1791: Rachel Pringle Polgreen, who ran the Royal Naval Hotel, died and left a considerable fortune in her will. 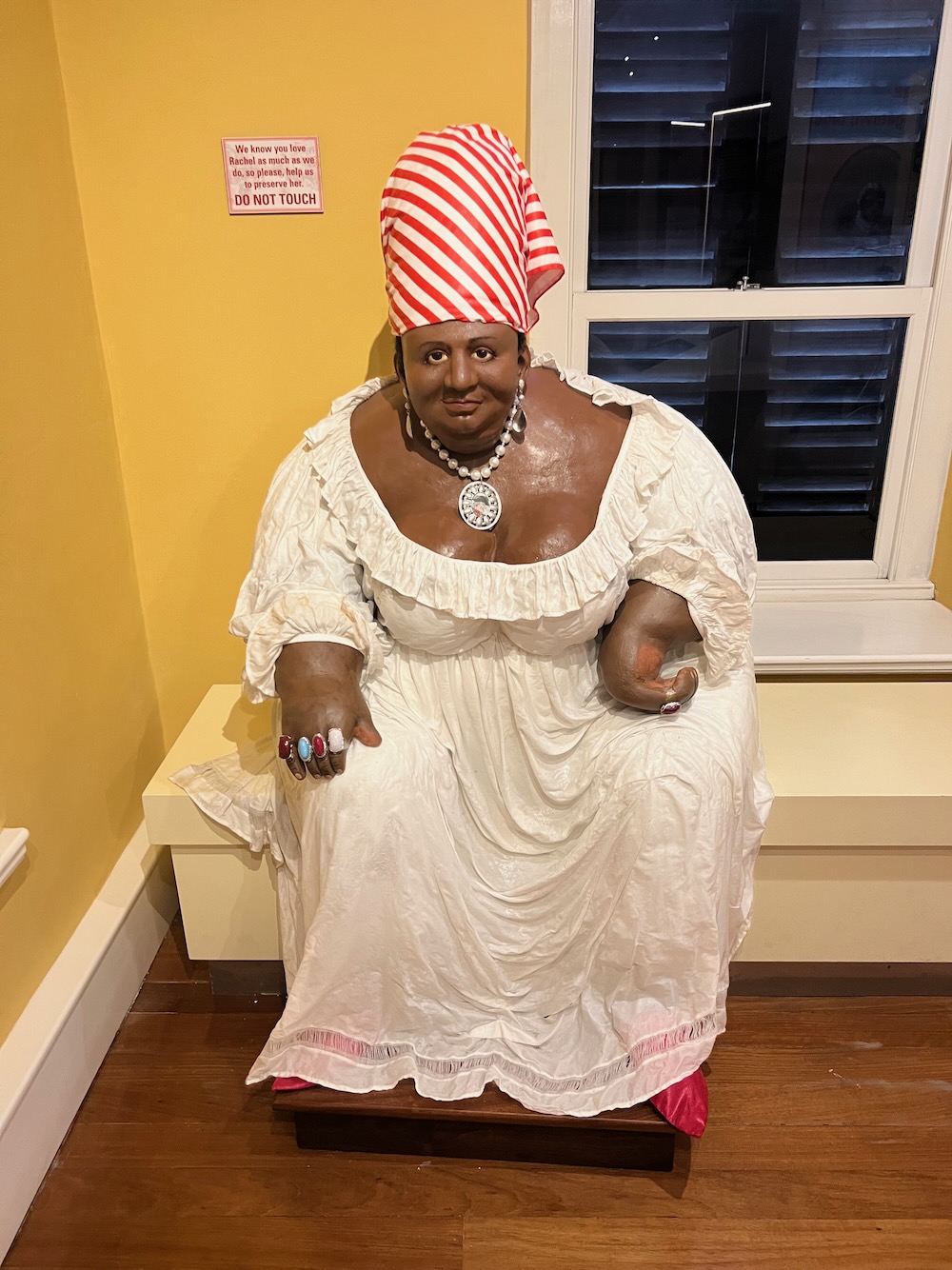 1807: On March 25, the slave trade was abolished in the British Empire after a vigorous campaign by abolitionists.

1830s: Friendly societies, encouraged by the Anglican Church, were first created in Barbados.

1831: A severe hurricane devastated Barbados and damaged many buildings and business premises in Bridgetown.

1837: London Bourne owned three stores in Bridgetown and had a net worth of between twenty and thirty thousand dollars.

1838: The end of the Apprenticeship system, which was introduced after Emancipation. 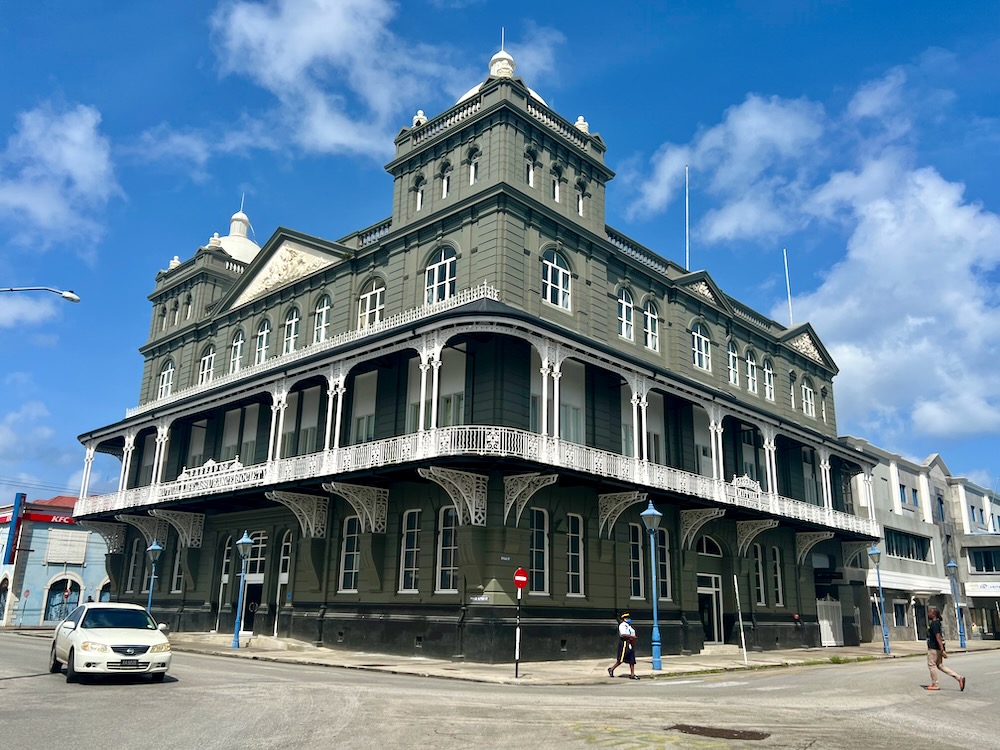 1846: The West Indian sugar industry lost the protection of the British government.

1854: Imperial Packet Agency and the Inland Post Office were amalgamated.

1872: Parliament Buildings in Bridgetown became the headquarters of the Barbados Postal Service for 112 years, until 1984.

1873: The Bridgetown Club opened in Hoad’s House on Broad Street with 100 members.

1895: The Bridgetown Club moved to the top floor of the Barbados Mutual Life Assurance Company’s building on Broad Street.

1904 – 1910: Thousands of Barbadians left the island to work on the Panama Canal construction, and many sent remittances back home. 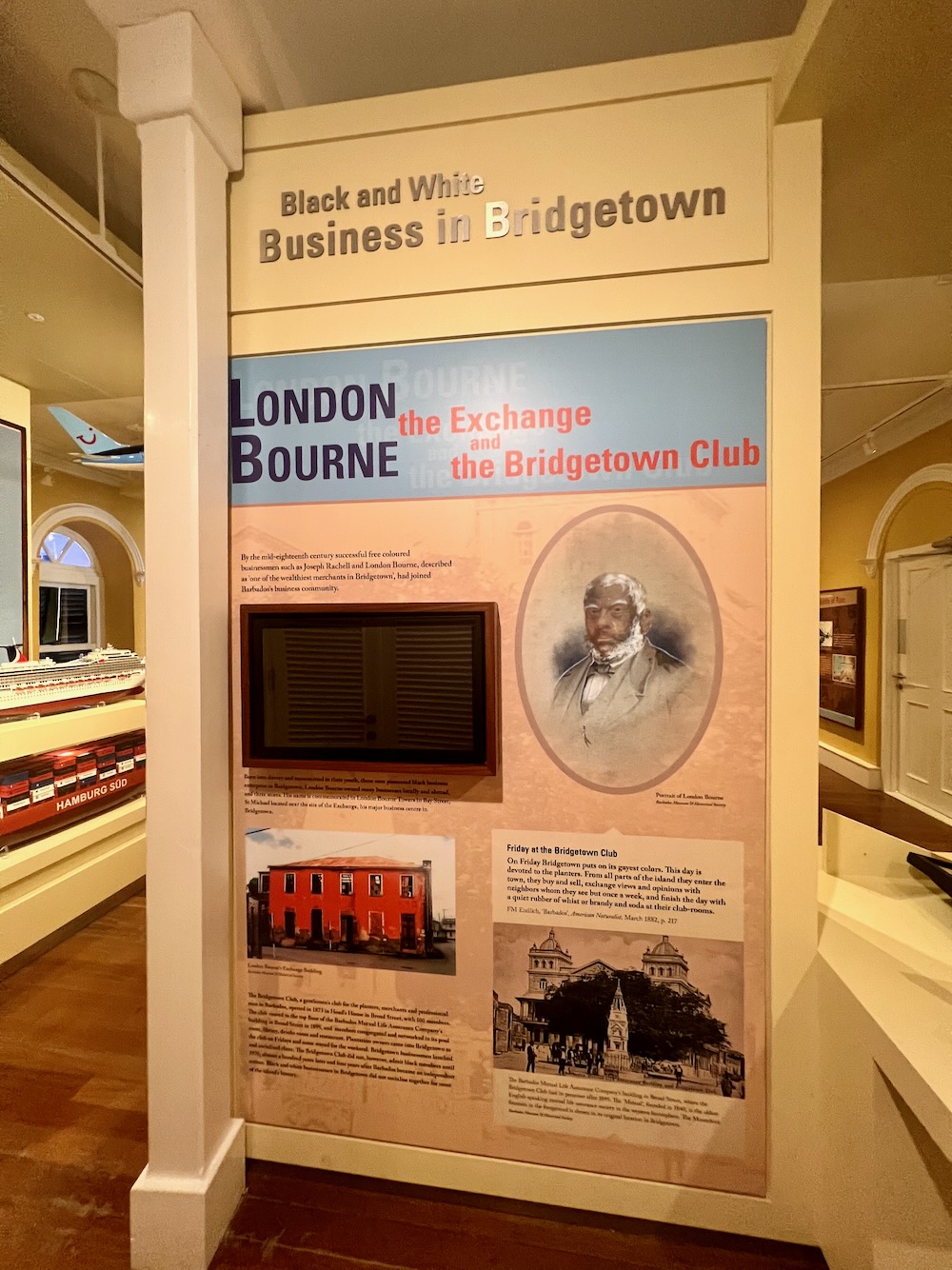 1929: On March 29, Captain William Lancaster made the first international flight into Barbados in a single-engine Avro Avian.

1933: Over 60 land ships across Barbados came together as a ‘fleet’ and were named the Barbados Land Ship Association.

1937: Riots break out in Bridgetown after the deportation of Clement Payne.

1938: On October 19, the first scheduled flight to Barbados, a KLM Royal Dutch mail shuttle from Trinidad.

When to visit the Exchange Barbados Museum

The Exchange Barbados Museum is located on Spry Street in Bridgetown. It is open from Monday to Saturday, from 9 a.m. – 5 p.m. Visitors can explore the museum to learn about the island’s history on their own or book a one-hour guided tour. This can also be combined with a general history of Bridgetown tour with stops at the Errol Barrow Statue, the Independence Arch, and the Spirit Bond. 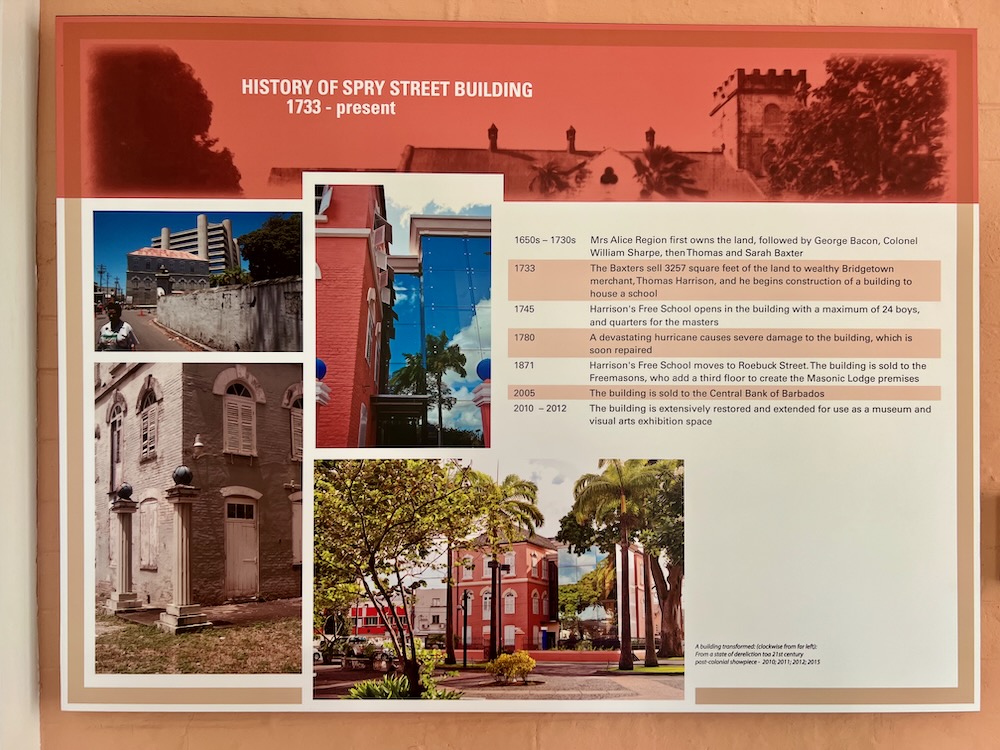 General entrance to the Exchange Barbados Museum is $15 BDS per adult, $10 BDS for group adults, and $10 BDS for children under 18 years old. Combined with a tour of Bridgetown, the price is $55 BDS per adult and $35 BDS per child.

The entrance fee is well worth the price as visitors (particularly children) to the Exchange Museum Barbados won’t get bored as it is interactive.  As you go through, you can: 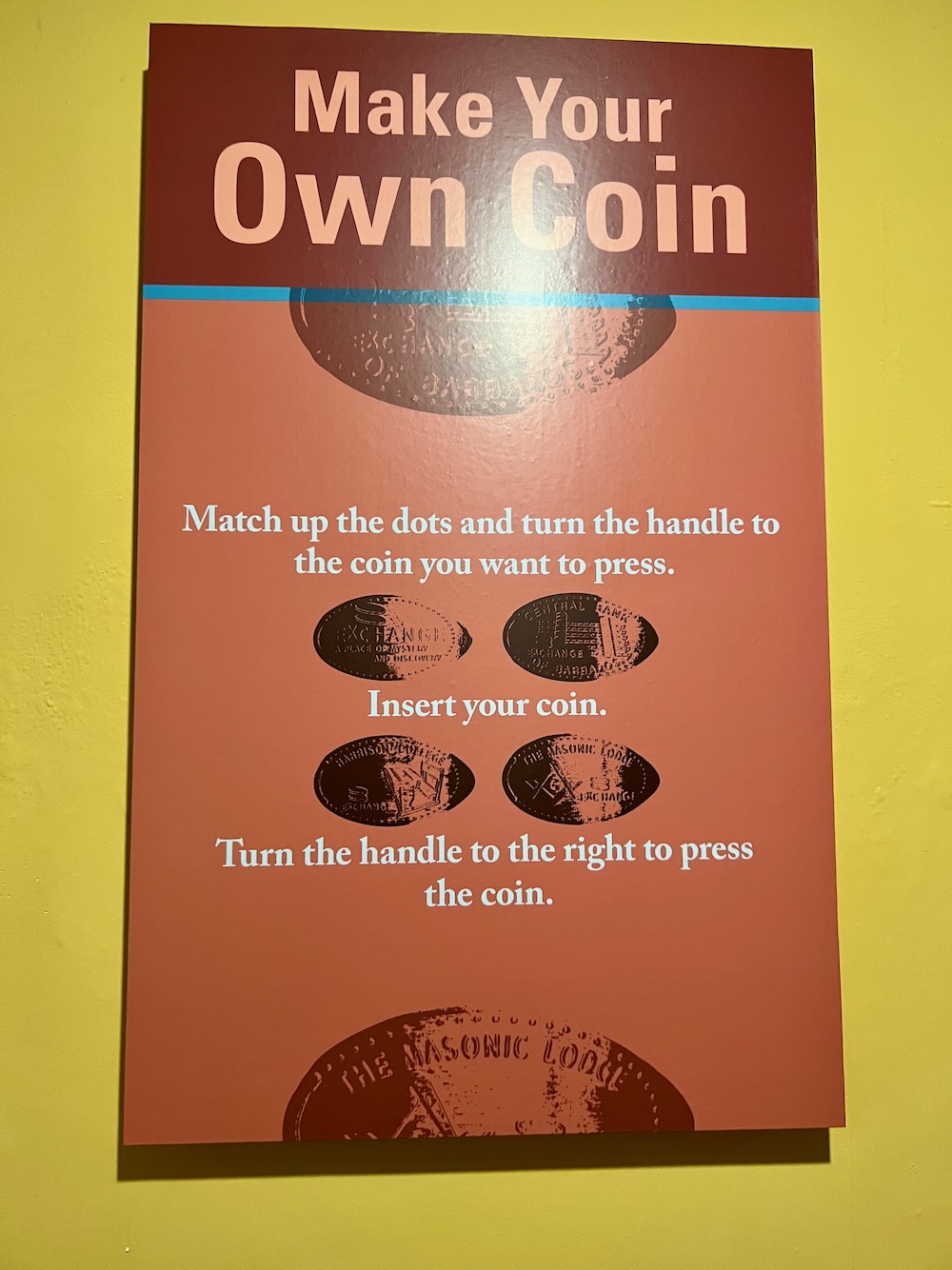 NOTE:  The Exchange Museum Barbados is but one of thirty top attractions in Historic Bridgetown and its Garrison. So be sure to check them all out! 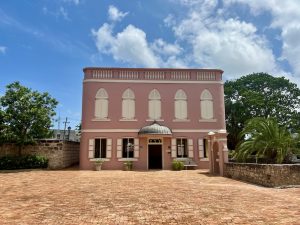 History of the Jews in Barbados | Visiting the Nidhe Israel Synagogue and Museum, all part of the Barbados Synagogue Historic District