The Caribbean island of Antigua is primarily known for its 365 white sand beaches, but as the locals like to point out, the beach is just the beginning. A former British colony, Antigua has a rich culture and heritage with numerous other tourist attractions beyond its beautiful beaches. Personal favorites include exploring Nelson’s Dockyard National Park recently voted by USA TODAY readers as the best tourist attraction in the Caribbean and the historic city of St John’s which had its first European settlers starting in 1632. I particularly enjoy walking around St John’s, Antigua looking at its many historical and colorful buildings.

The first people who lived on the Caribbean island of Antigua were the Guanahatabey people from around 3100BC. They were followed by the Arawak and later the Carib people. The Arawak people called the island Yarumaqui which is a combination of the word yaruma a plant from which canoes and rafter were made and qui which means island. Later, the Carib called the island Waladli which is close to the Amerindian word for oil.

The name Antigua was given by Christopher Columbus who spotted the island on his 1493 voyage. The legend goes that he named the 108 square mile island Santa Maria de la Antigua after a chapel dedicated to a famous miracle-working Virgin in Seville Cathedral, Spain. In Spanish, the world Antigua means ancient. It should be noted that while Antigua is the official name, the locals refer to it as Wadadli. This alternate spelling of the Carib name of Waladli was popularized by calypsonian Sir McClean “Short Shirt” Emmanuel’ who released the song ‘Wadadli Rock’ after the island gained independence. You’ll now find the name Wadadli being used by all sorts of companies including Wadadli Cats that offers catamaran tours around Antigua.

The historic city of St. John’s is the capital and largest city of twin-island nation Antigua & Barbuda. One of the oldest in the Caribbean, the town of St John’s was originally built after the French invasion of 1666 and is beautifully laid out in a grid pattern leading towards the busy harbor. This grid system makes it very easy to explore the city of St John’s as the major streets run east to west with smaller cross streets north and south. And while significant fires in 1769 and 1841 destroyed many of the original buildings, many of the existing ones are over 150 years. Thus from walking around the bustling city of St John’s you get a good sense of the history of Antigua through its diverse architecture with Georgian, International, Romantic, Venacular and Victorian buildings. Beyond the buildings, take note of some of the quirky street names including Corn Alley, Friendly Alley, Gutter Lane, Popeshead, etc.

1. Cathedral Of St John The Divine

Address: St John’s Street, St. John’s, Antigua | Website
Towering above the city of St John’s in Antigua is St John’s Cathedral also known as St. John the Divine, the Cathedral Church of the Diocese of North Eastern Caribbean and Aruba. The original Anglican cathedral was a wood structure built in 1681 that was damaged by the 1683 earthquake. This was replaced by a stone building that was also destroyed by another earthquake in 1843. The current cathedral with two white twin towers designed by the architect Thomas Fuller of Bath was opened in 1847.  The St John’s Cathedral is actually two separate buildings with their own unique architecture that share a foundation. The exterior is a stone structure, and the interior is a wooden one that is currently being restored.

Antigua & Barbuda: View of Cathedral of St John the Divine.

NOTE: Before you even enter this beautiful Baroque cathedral, take note of the biblical figures of St John the Divine and St John the Baptist that are above the south iron gate that dates back to 1789. The British Navy confiscated these biblical figures from the HMS Temple, a French ship that was on its way to Martinique during the Seven Years’ War in 1756. 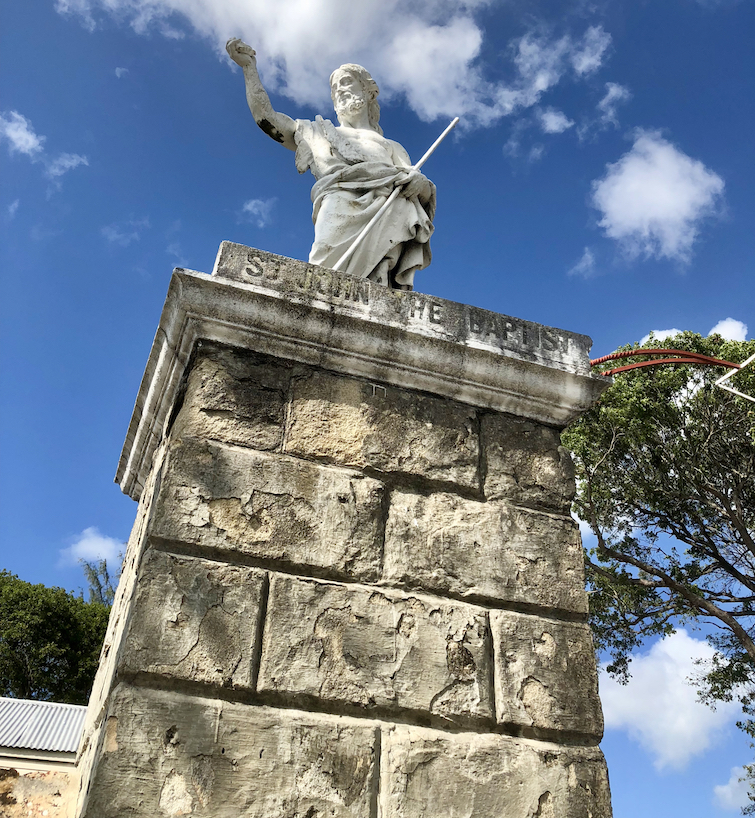 Antigua & Barbuda: St John the Baptist figure on the gate at Cathedral of St John the Divine.

Address: Church Street, St. John’s, Antigua | Website
The Antigua & Barbuda Government House is the official residence of the Governor General, who represents Head of State, Queen Elizabeth II. It was initially built in the 17th-century colonial style with Georgian architecture and extensive gardens. Formerly owned by Mr. Thomas Norsbury Kerby, a slave owner, it was known as the Parsonage House, partly due to being so close to St. John’s Cathedral.

The current building dates back to the 19th-century and is surrounded by stables, carriage houses, laundry buildings, kitchens, servant quarters, cisterns, limestone filters, and gardens set within a masonry perimeter wall. Sadly, the Antigua & Barbuda Government House which was added to the 2018 World Monuments Watch, is not open to the general public as repairs are currently underway. Nonetheless, it is still worthy of visiting to catch a glimpse of the building and garden with mature trees including West Indian mahogany, red cedar, and lignum vitae. 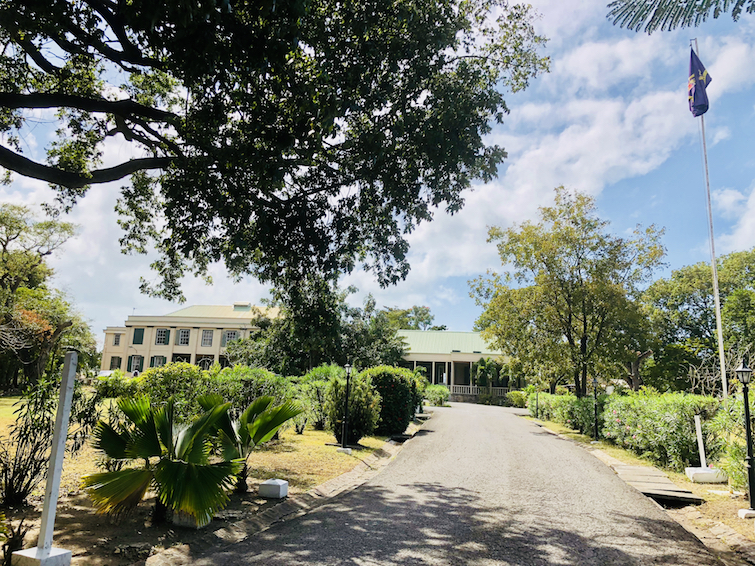 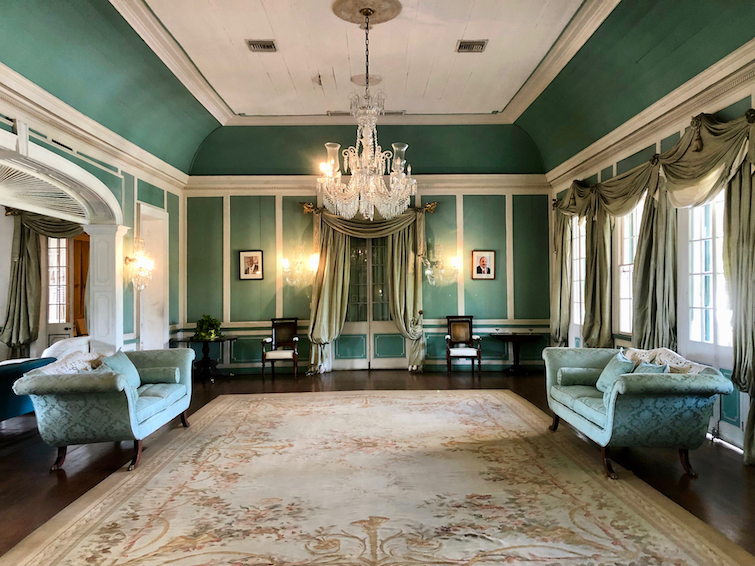 Address: Long Street, St. John’s, Antigua | Website
The Museum of Antigua & Barbuda which opened in 1985 is housed in the former St John’s Courthouse and is believed to be the oldest building in St John’s. Designed by English-born Peter Harrison who is recognized as the first professionally trained architect in America, the St John’s Courthouse in neoclassical design was built on the site of the first market in St John’s and completed circa 1750. Initially, the Court of Justice was on the first floor, and the Court of Assembly used the second floor. Now, the Museum of Antigua & Barbuda showcases the history of the twin-island nation from its geological birth to independence from Britain in 1981. 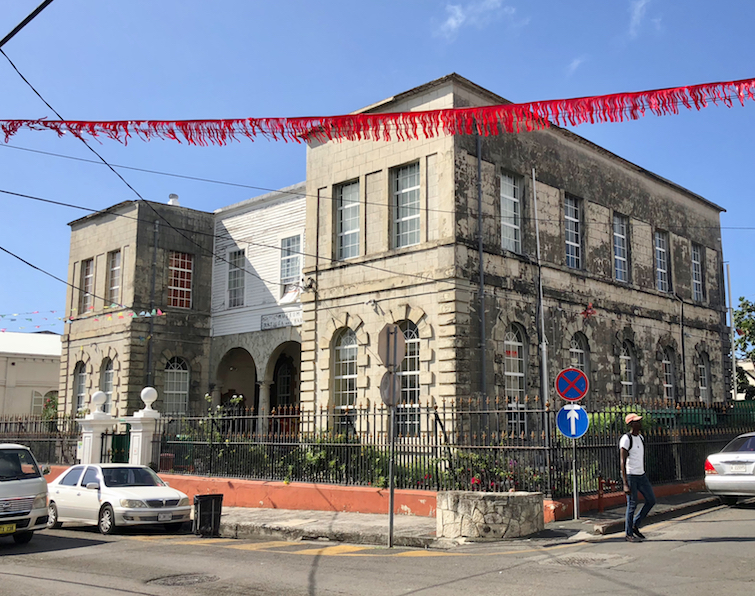 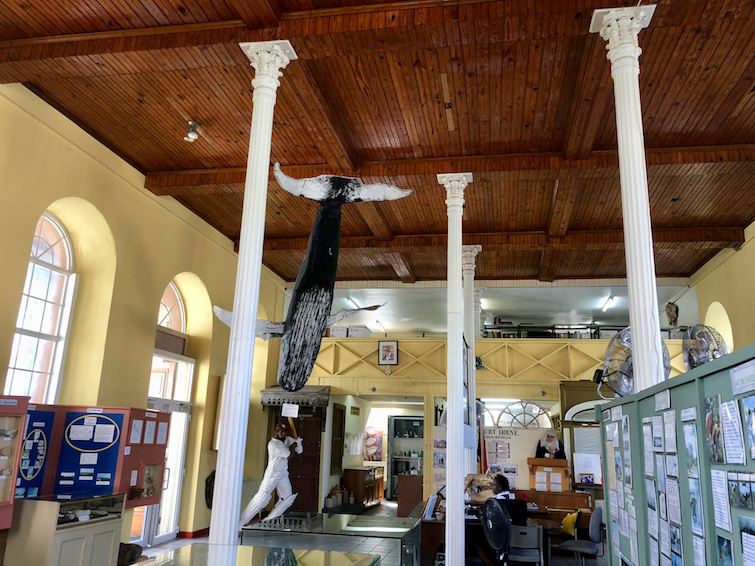 Beyond the geological and historical artifacts, there is a small gift shop with a variety of items for sale including beautiful artwork by Antiguan & Barbudan artist, Vernon Grigg. Vernon Grigg’s paintings in oil or water and acrylic, beautifully capture Caribbean life showcasing everyday activities, local sports, and pastimes. 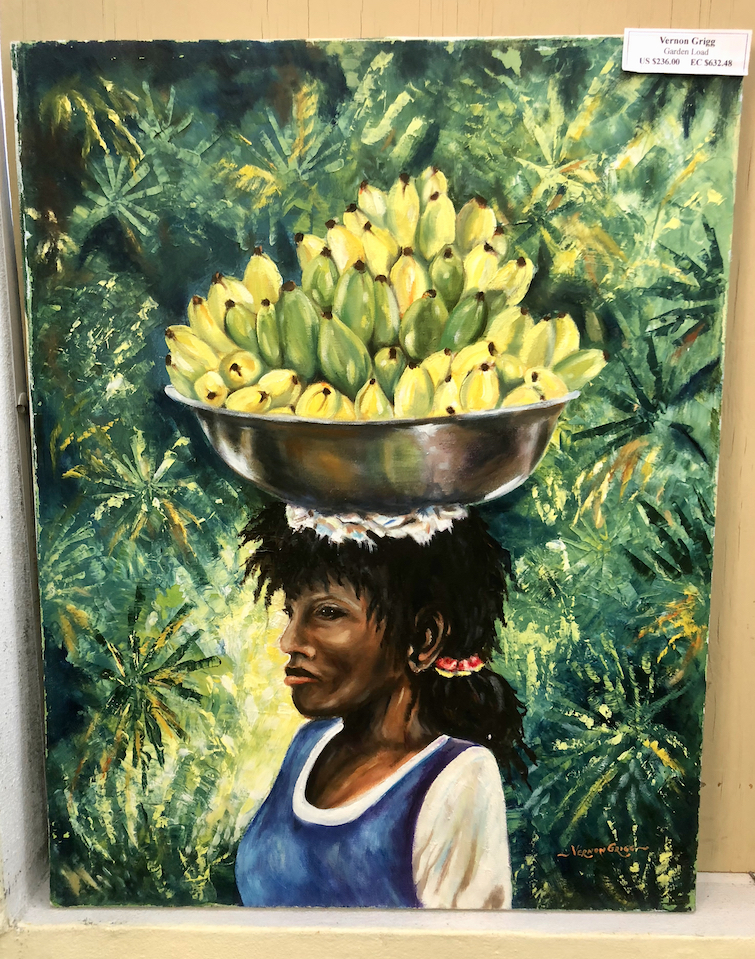 Outside of the Museum of Antigua & Barbuda, you will find parts from some of the ten steam and gasoline locomotives built by Kerr Stuart Ltd between 1904 and 1938 and delivered to the Antigua Sugar Factory. These steam trains ran on 35 miles of track around Antigua and were used for transporting freshly cut sugar cane from the sugar plantation fields to the central refinery on Gunthorpe’s Estate. At peak production in 1952, over 228,302 tons of sugar cane was carried on these Kerr Stuart trains to produce 1,520 tons of sugar. Today, as Antigua & Barbuda’s economy has shifted from agriculture to tourism, the sugar plantations and steam locomotives are no longer in use. 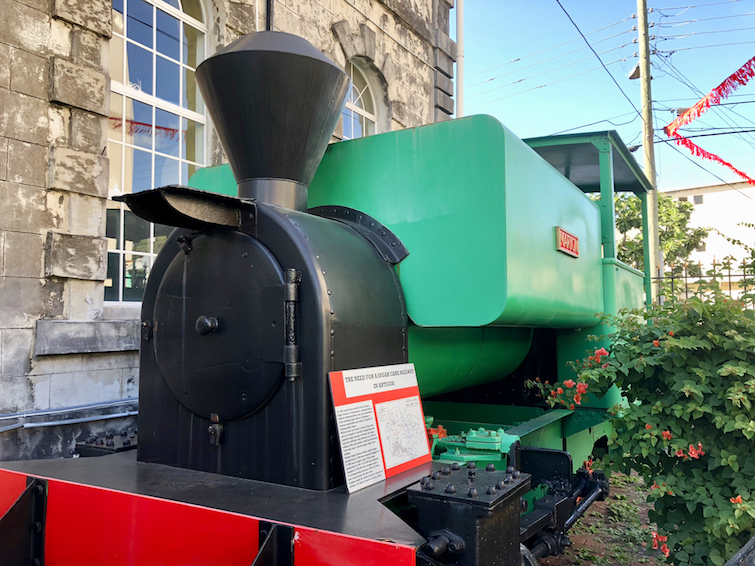 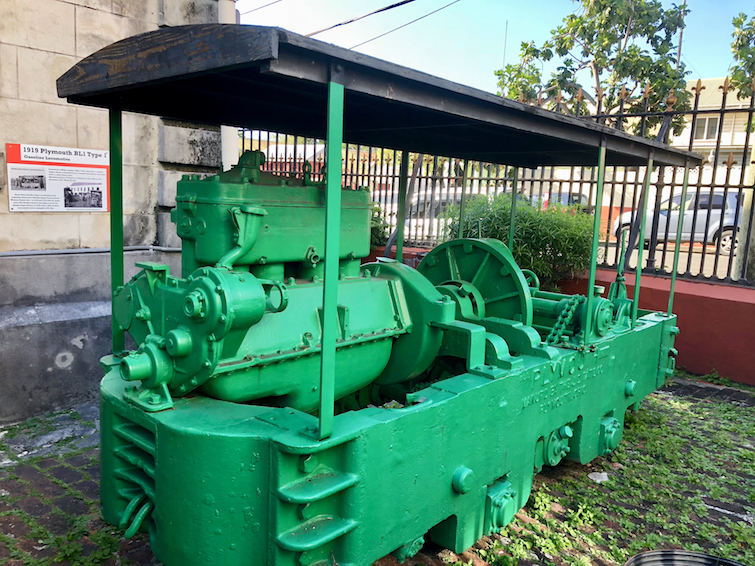 Kerr Stuart gasoline locomotive at the Museum of Antigua & Barbuda.

Address: St Mary’s Street, St. John’s, Antigua
Beyond the more museum-like brick buildings in St John’s in Antigua, there are lots of colorful structures. Mostly wooden, these buildings in St John’s Antigua are being used as schools, shops, offices, and residential homes. Colorful buildings include the St John’s Catholic Primary school just around the corner from the Antigua & Barbuda Government House that is pretty in pink! Closer to the waterfront are a cluster on buildings on St Mary’s Street including Mitchell A. Michael, Hadeed Phillips Store, Batik Caribella, Rain Boutique, and Jadine Court & Hemingways Restaurant, etc. Another favorite is the Radio Shack building with masonry ground floor and wooden second floor with beautiful shutters.  They are all traditional and what I’ve come to expect when exploring a Caribbean city steeped in rich history! 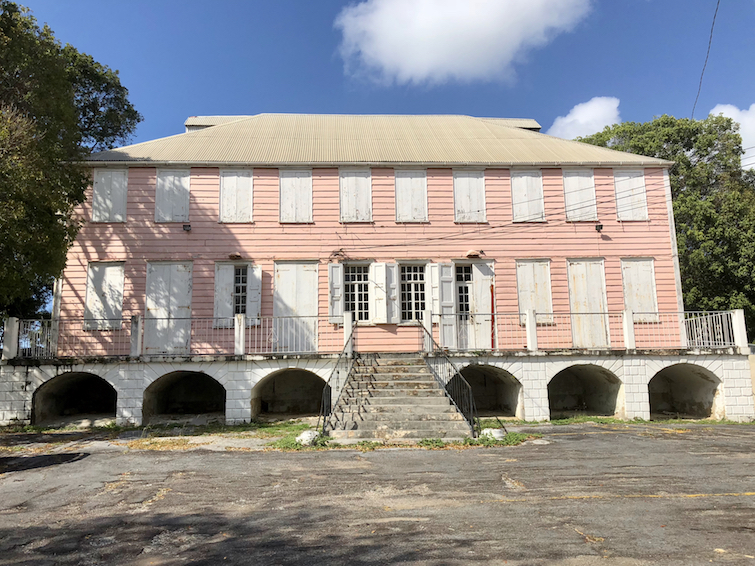 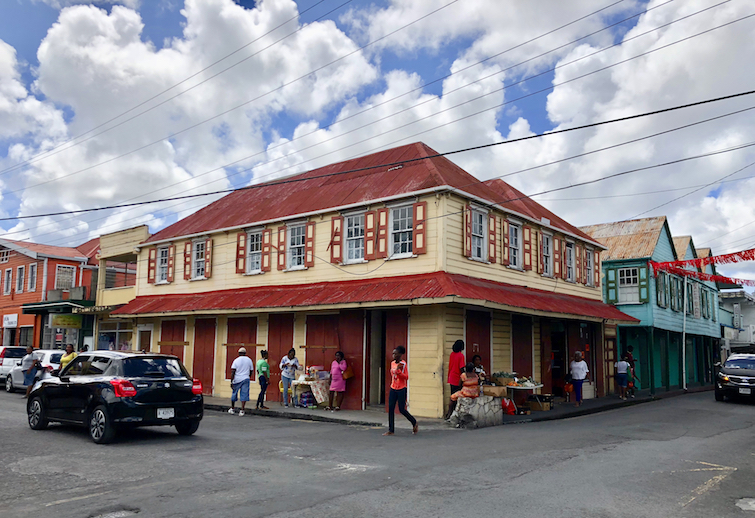 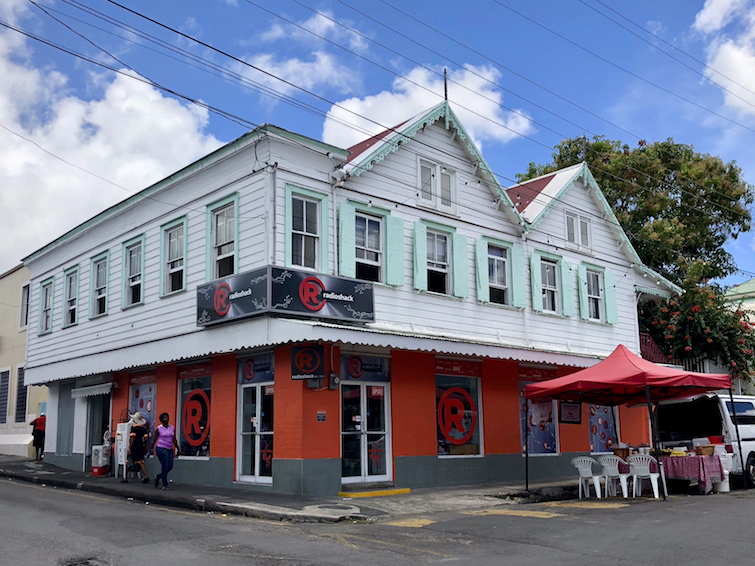 Address: Redcliffe Quay, St. John’s, Antigua | Website
Cruise ships visiting Antigua & Barbuda dock in the harbor at historic Heritage Quay and Redcliffe Quay. Once the slave-trading area for the town, Redcliffe Quay is one of the oldest parts of St John’s in Antigua.  The Redcliffe Quay area of St John’s was redeveloped in the1980s by architect Bill Fraser. Within Redcliffe Quay which features some small courtyards, you’ll find an even higher concentration of colorful Georgian style buildings with a West Indian flare. Housed within these colorful buildings in St John’s Antigua are about thirty shops selling a wide variety of souvenirs including Antiguan Batik clothes, jewelry, pottery, and painting. Beyond the shops in Redcliffe Clay are about a dozen restaurants, bars, and cafes. Within Heritage Quay which is more modern, there are even more duty-free shops, bars, and restaurants all mostly catering to tourists. 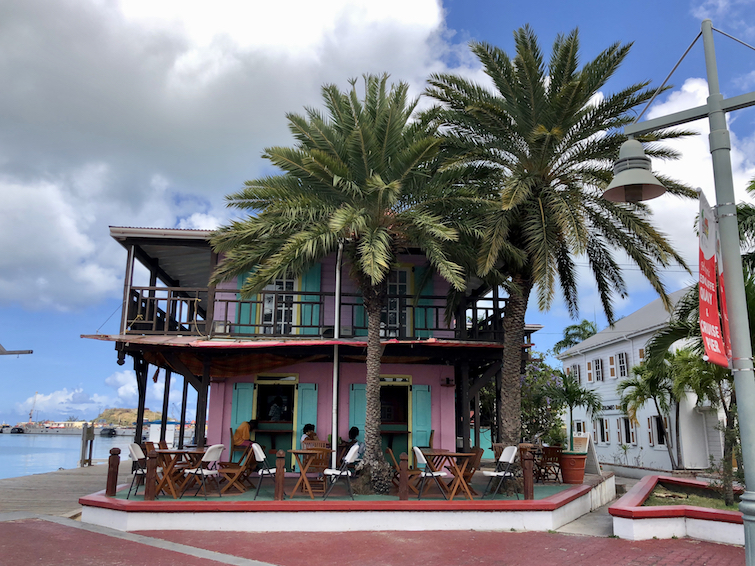 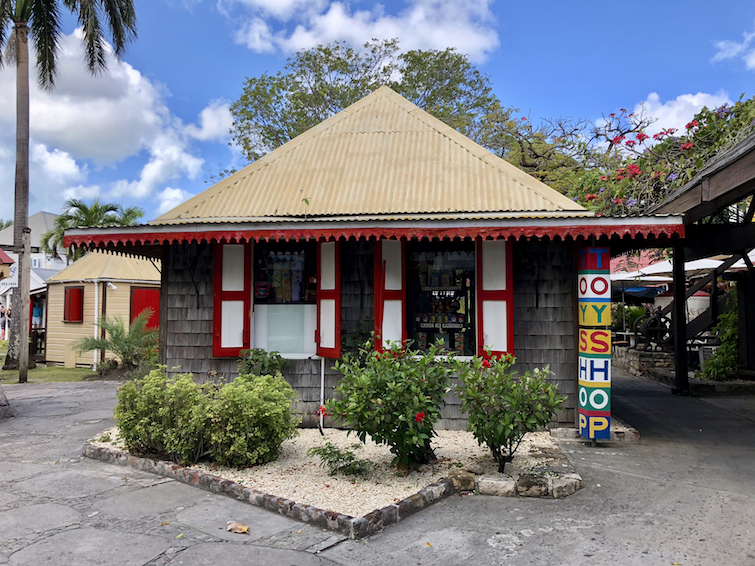 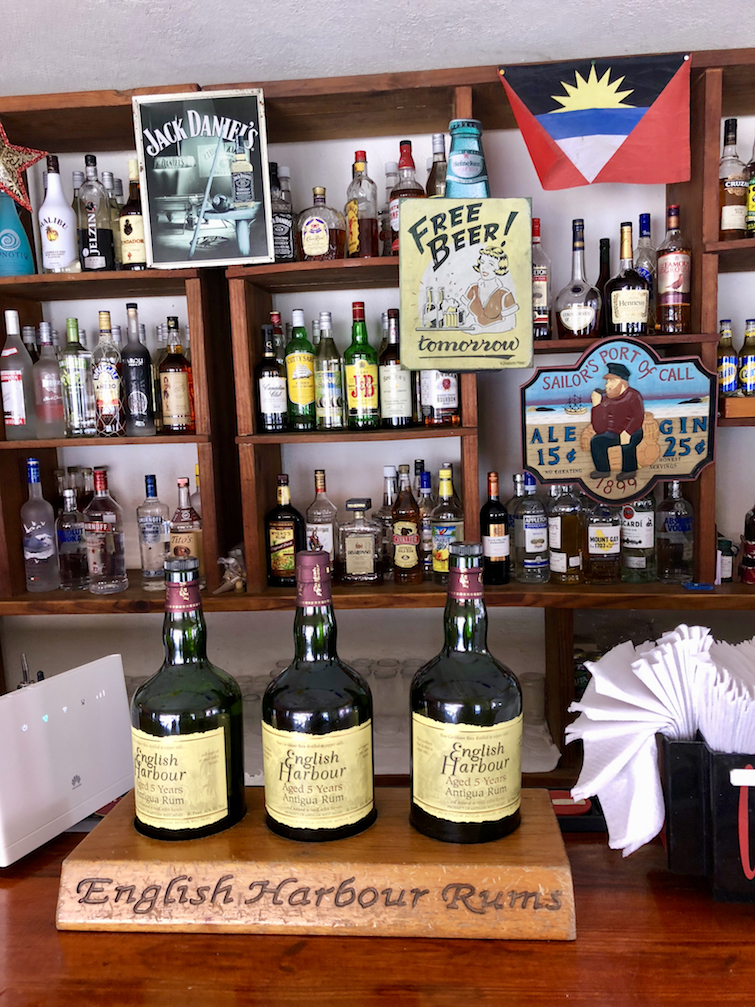 BONUS: If you visit St John’s Antigua on a Saturday morning, would also recommend checking out the Heritage Market which is located on Market Street. Caribbean markets are quite lively on Saturday mornings and so at Heritage Market, you’ll find lots of local vendors from all over Antigua selling a range of fruits and vegetables including the Antigua black pineapple. Mixed in are vendors selling a variety of crafts and souvenirs. You’ll also get to see the colorful monument for Sir Vere Cornwall Bird who became the first Prime Minister of Antigua & Barbuda after independence from Britain in 1981. 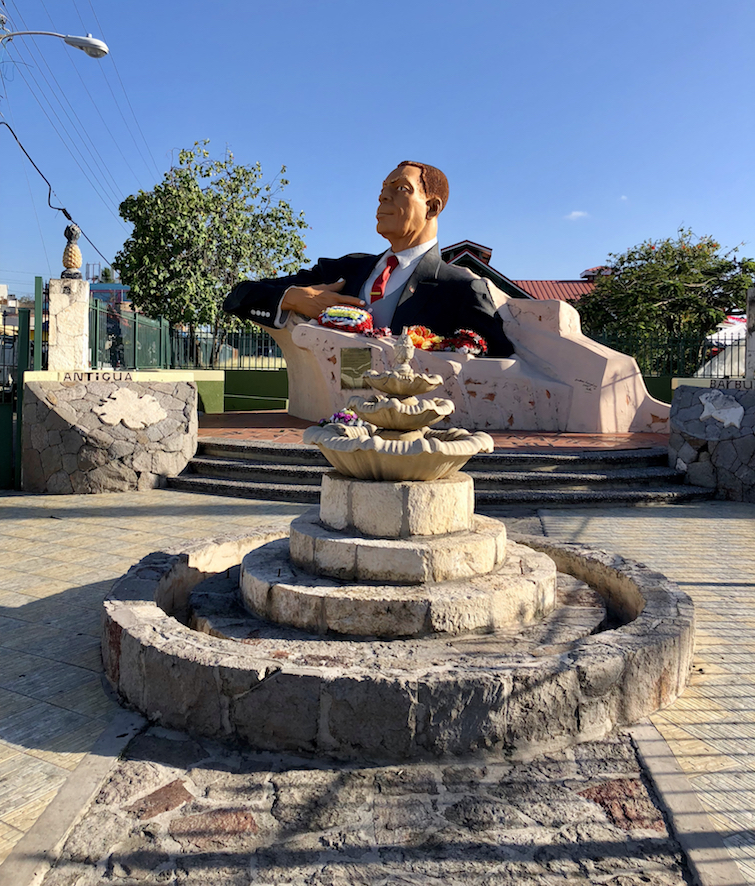 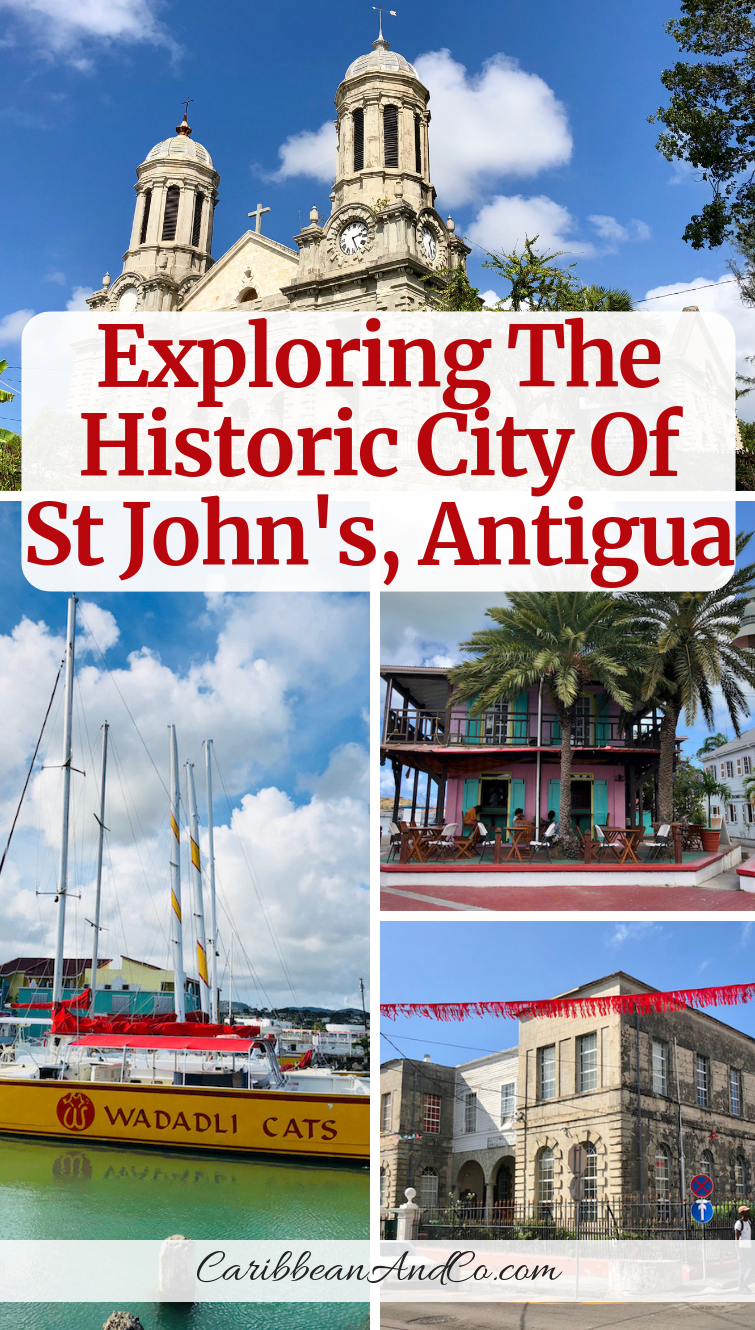 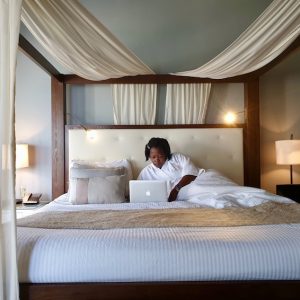 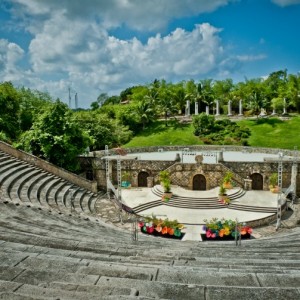